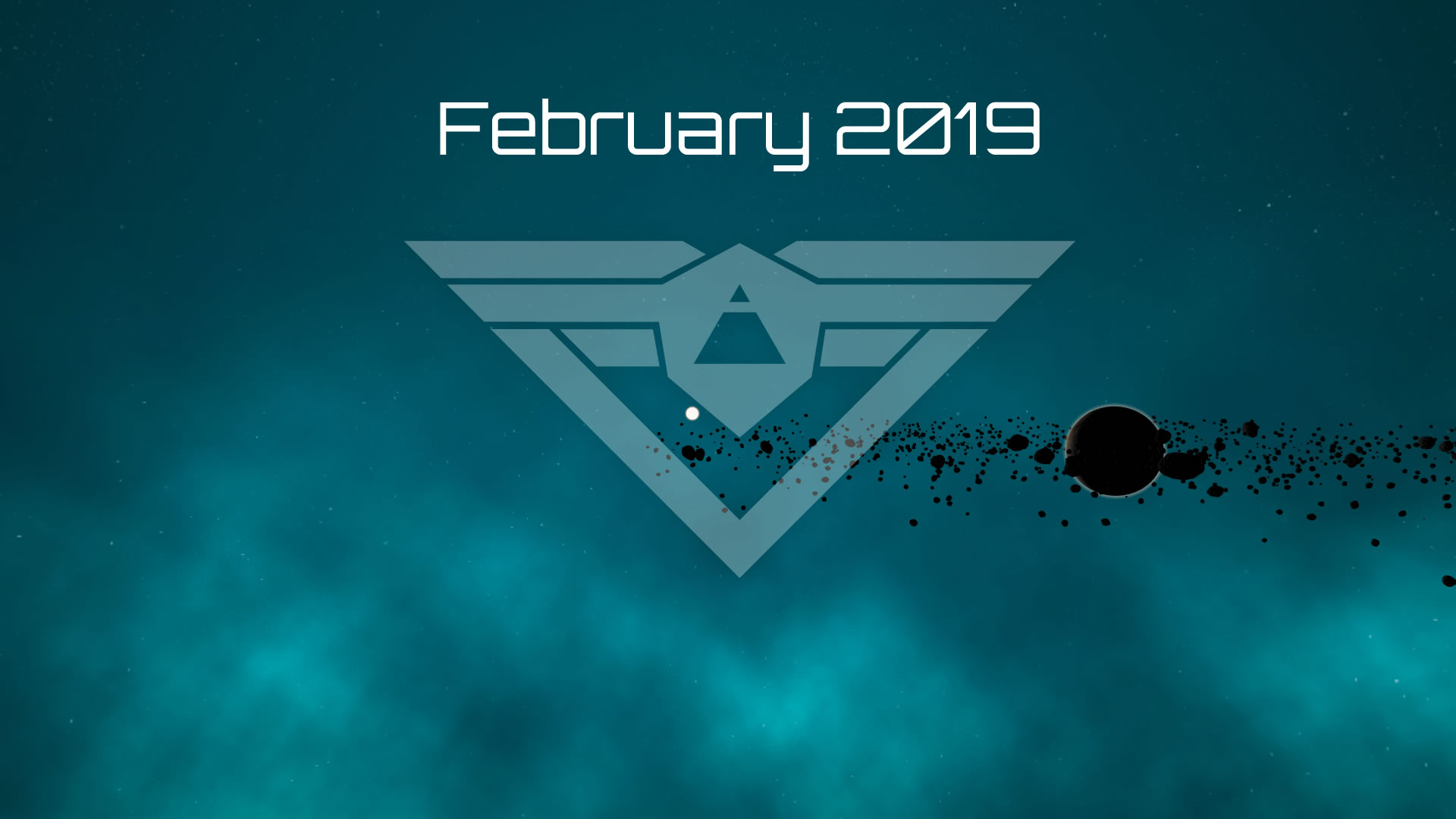 This is the Junction Gate development update for February, but I'll also be covering some content you may have seen from January's update since it's in a more completed state. You can watch the update video for an actual walkthrough of the content of this post and some additional details.

First, a quick update on the 3D version of Junction Gate. In January, I spent a lot of time planning out our first milestone and Caleb worked on additional character movement mechanics, but February was slower because I was working exclusively on the new Junction Gate website and Junction Gate Legacy, while Caleb needed to spend time working on another project.

I expect that we should have more to show off next month, but there won't be anything to showcase in this update.

My major focus for Junction Gate Legacy recently has been revamping how factions are generated, overhauling diplomacy, and adding espionage mechanics to the game. It still has work to be done, but let's do a quick walkthrough of the changes.

Espionage is going to become a very vital part of the gameplay going forward and should add some depth in the mid-to-late game and create interesting game situations.

You can now recruit intelligence agents (spies) from a recruitment pool. Each has a very particular set of skills. Each skill can be upgraded through training. As you send your agents out on missions, they'll be pitted against other security forces. Some of those forces will be easy to get past, others will be harder, and they will get better over time. 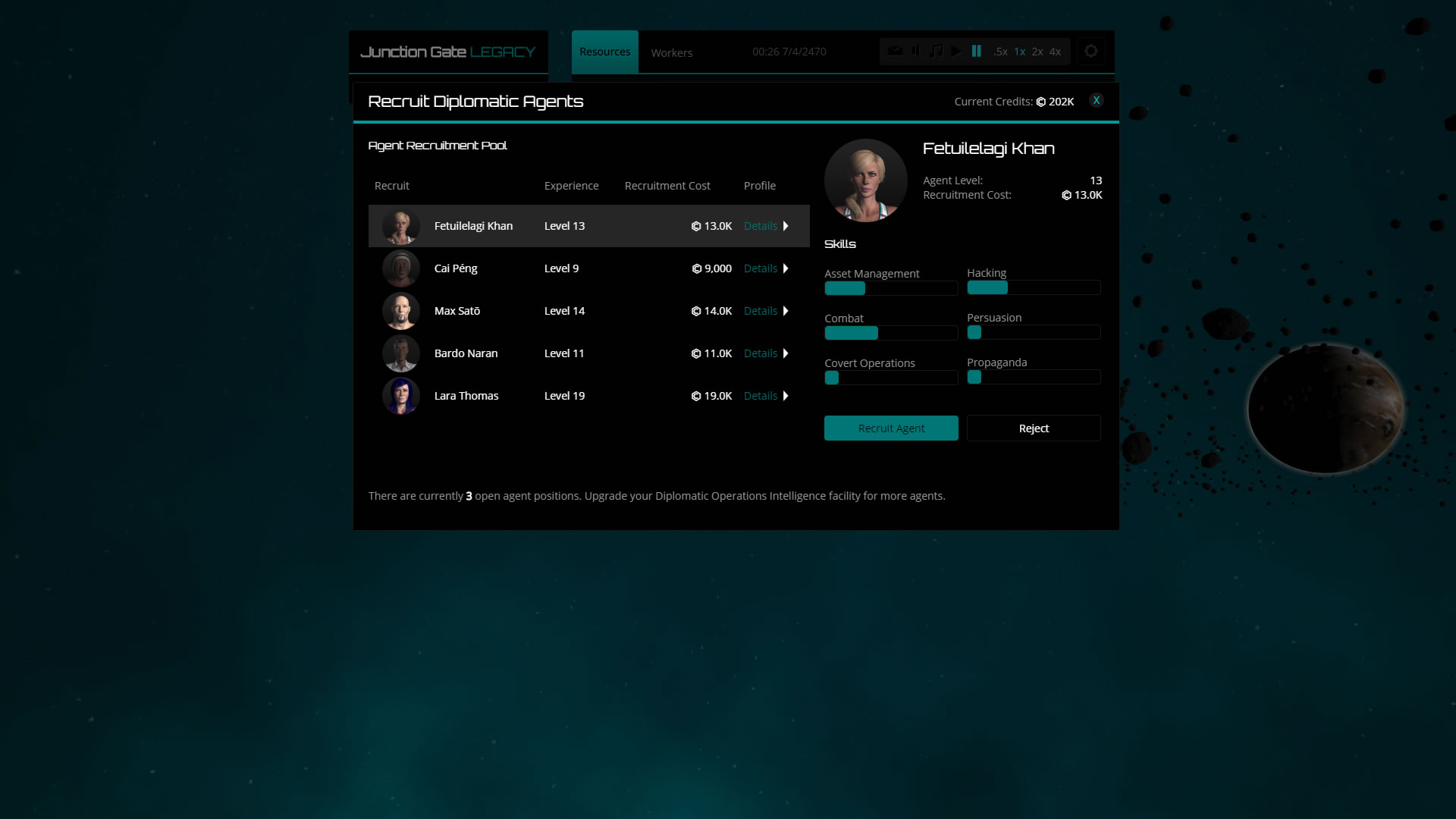 I'm still adding espionage missions, but the basic mission framework is in place, as is a new event system which will be used by other game event types. 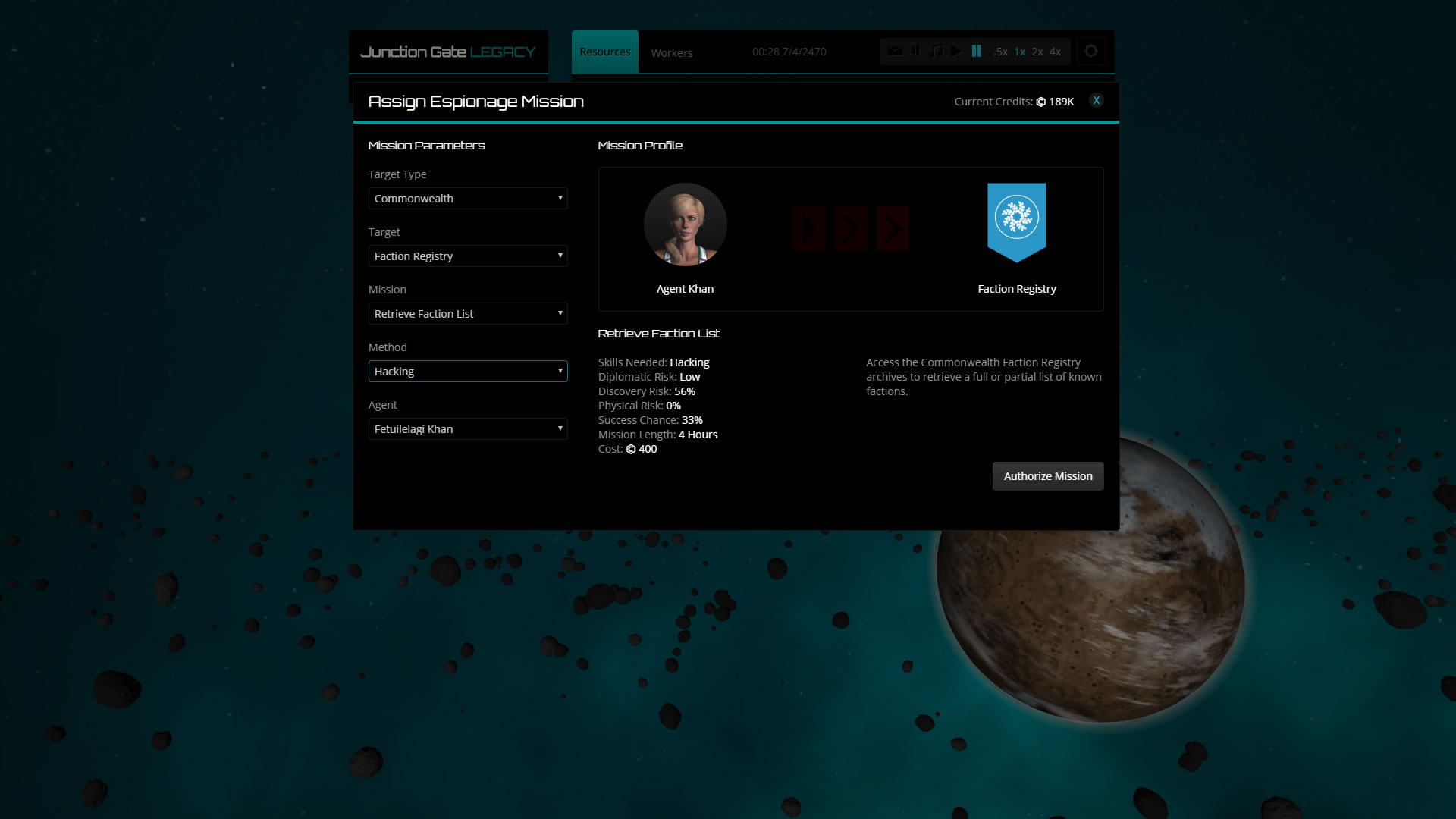 For each bit of intelligence information, there could be multiple ways to uncover it including espionage, exploration, trade, and diplomacy. One of the first missions you might do is attempt to uncover faction contact information. This can be done via a hacking or covert operations espionage mission or through exploration in your ships. 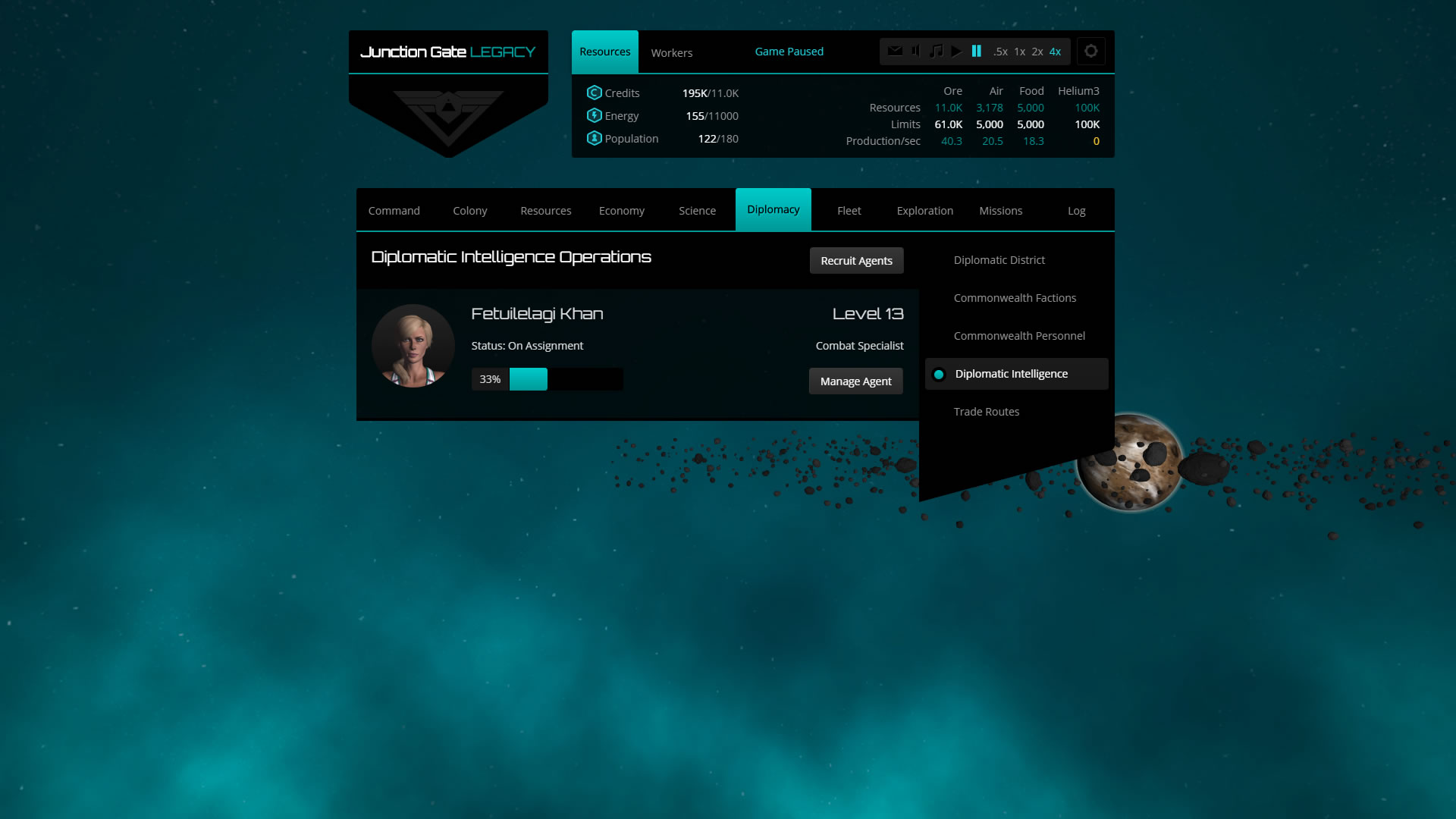 Every mission has a chance of failure and sometimes there will be consequences, from either the Commonwealth itself or one of the factions. 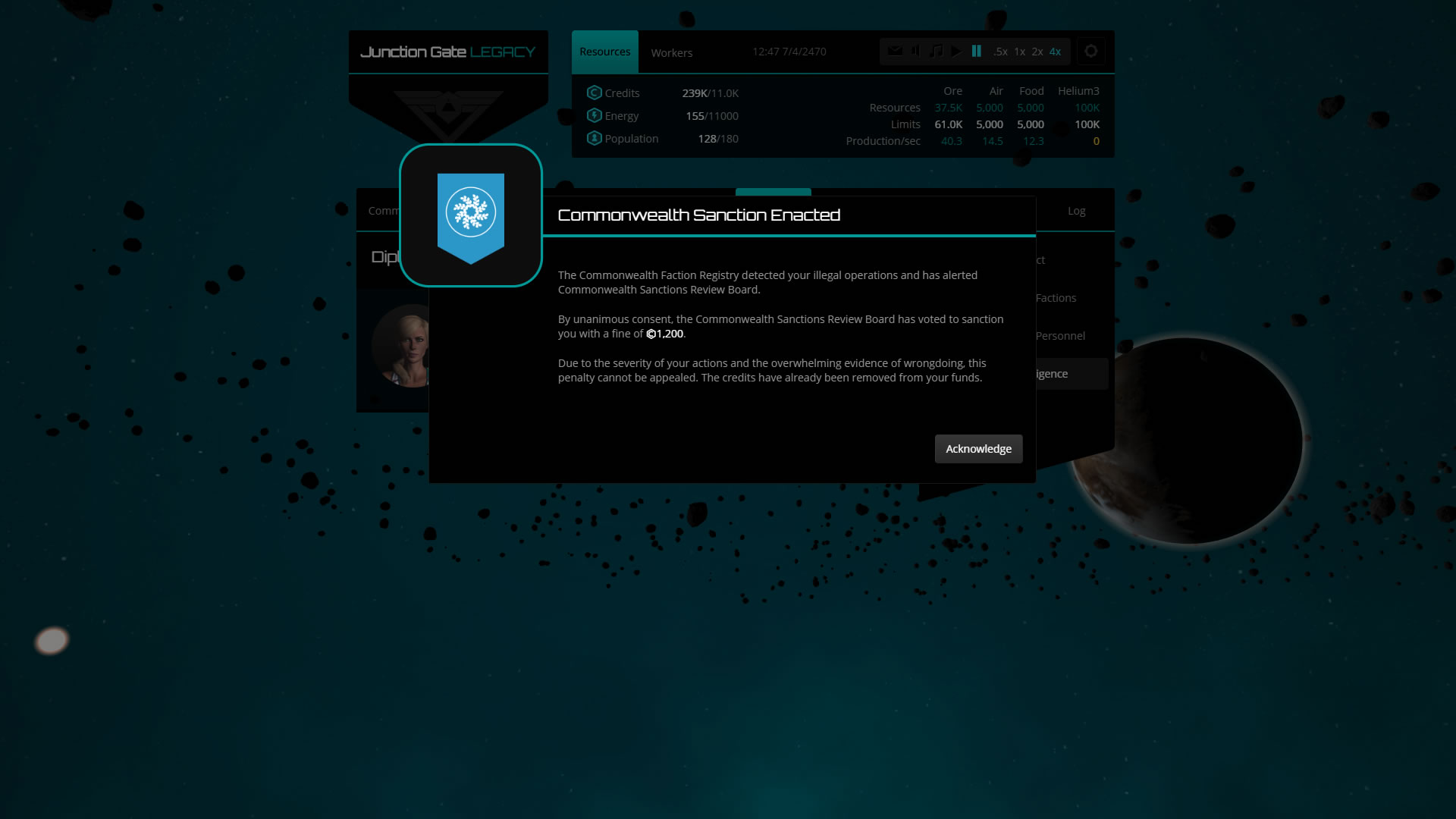 However, success brings its own rewards. 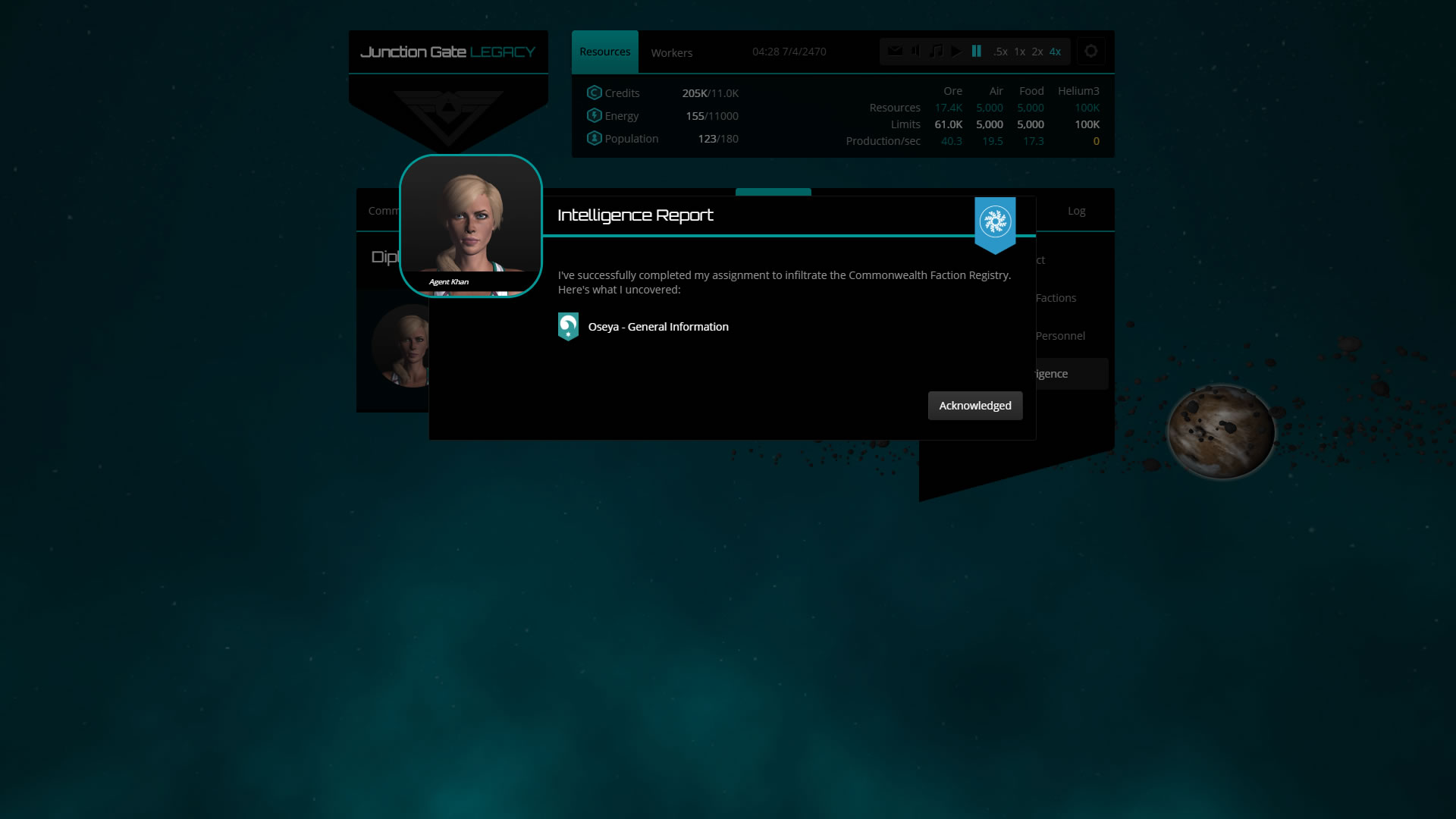 Once the faction contact information is retrieved, you'll get to learn about the faction history, but the other tabs in the faction modal will be locked. 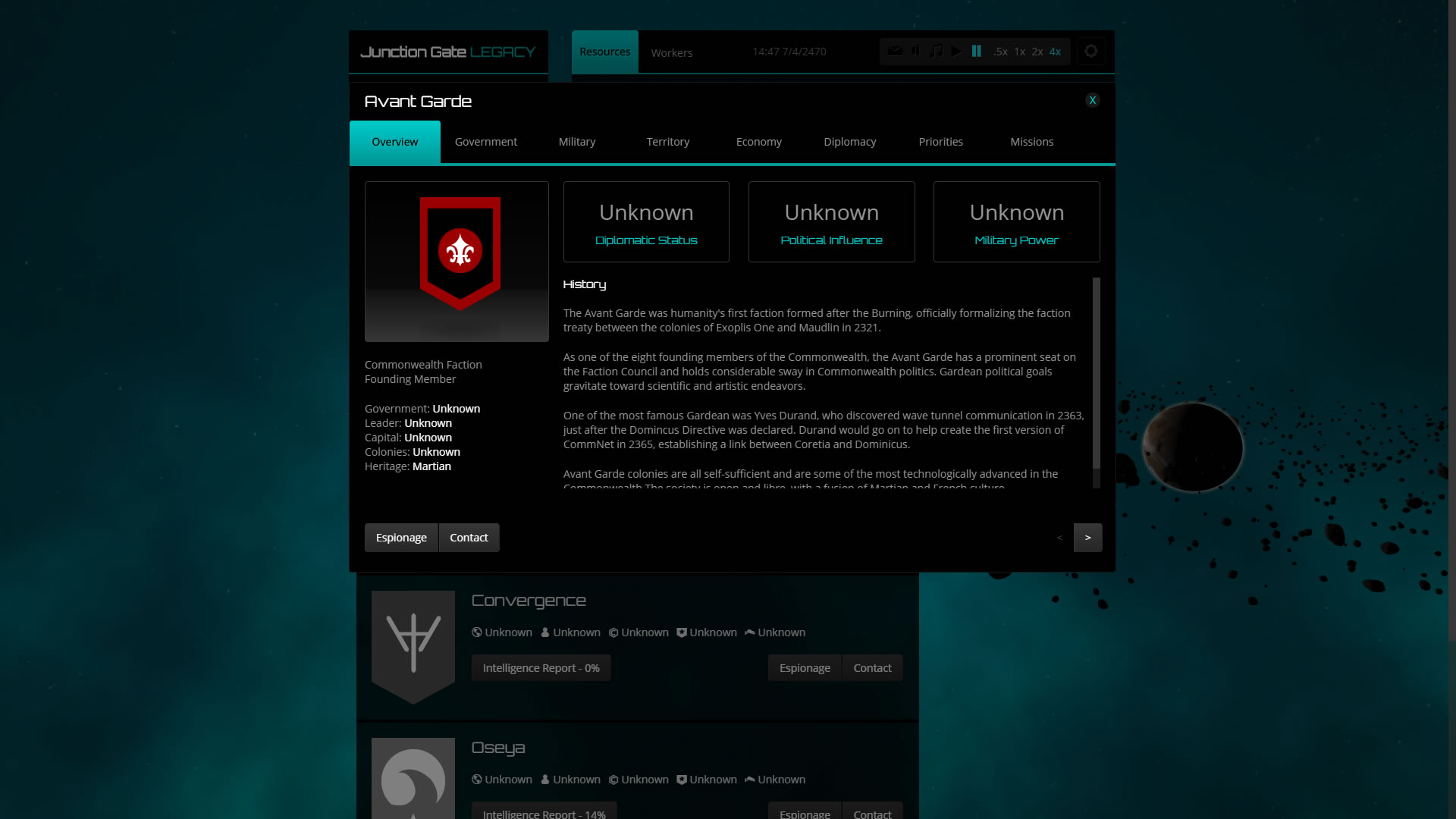 The tabs in the faction modal can be unlocked via additional missions run with the faction as a target. 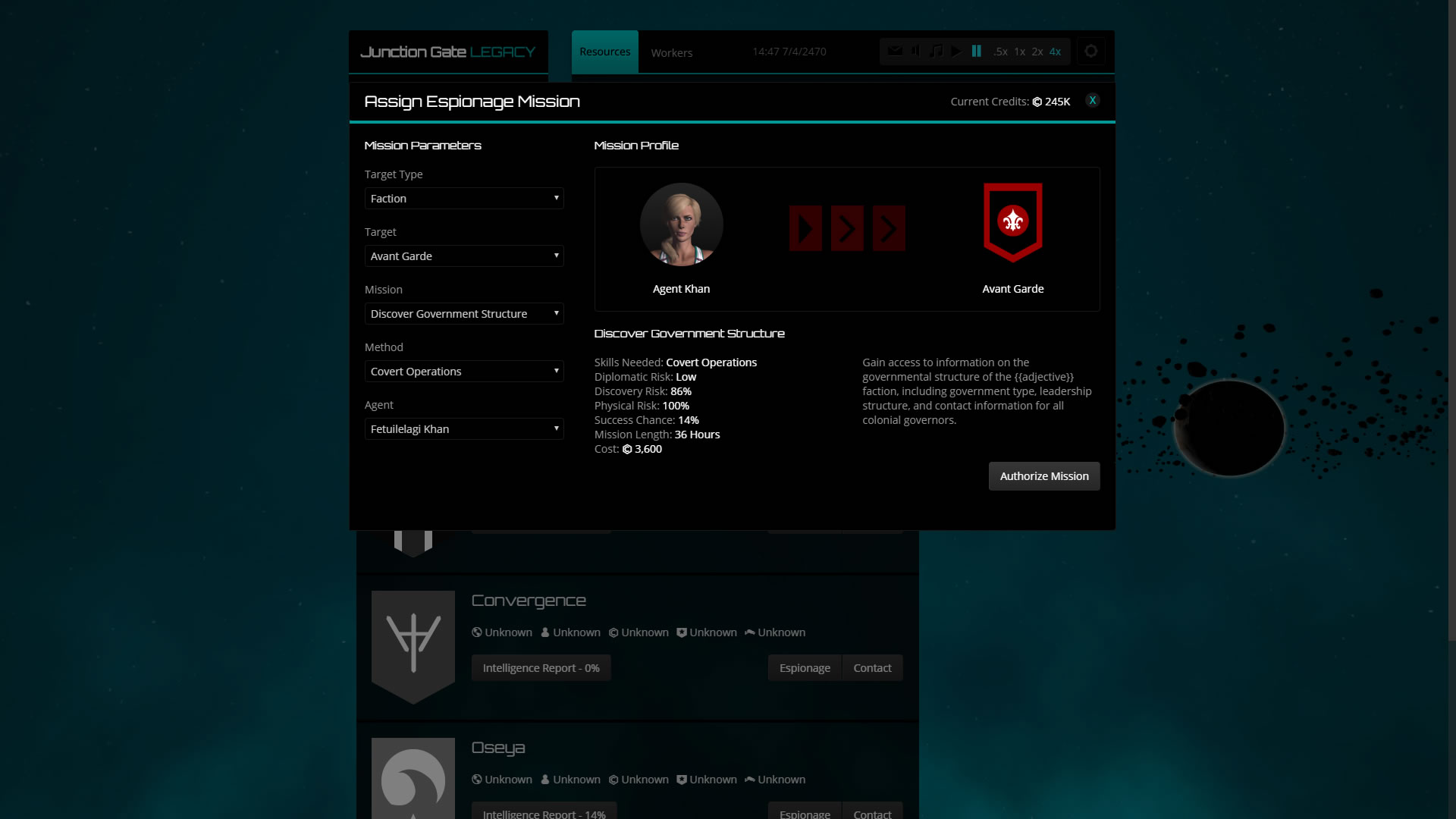 When the first faction mission is completed, it unlocks the government tab. In the power section, the names and titles of faction governors is displayed, along with their power rankings relative to each other. This will be useful in diplomacy, because those ranking and titles can change and you might be able to help or hurt the governors through your actions. 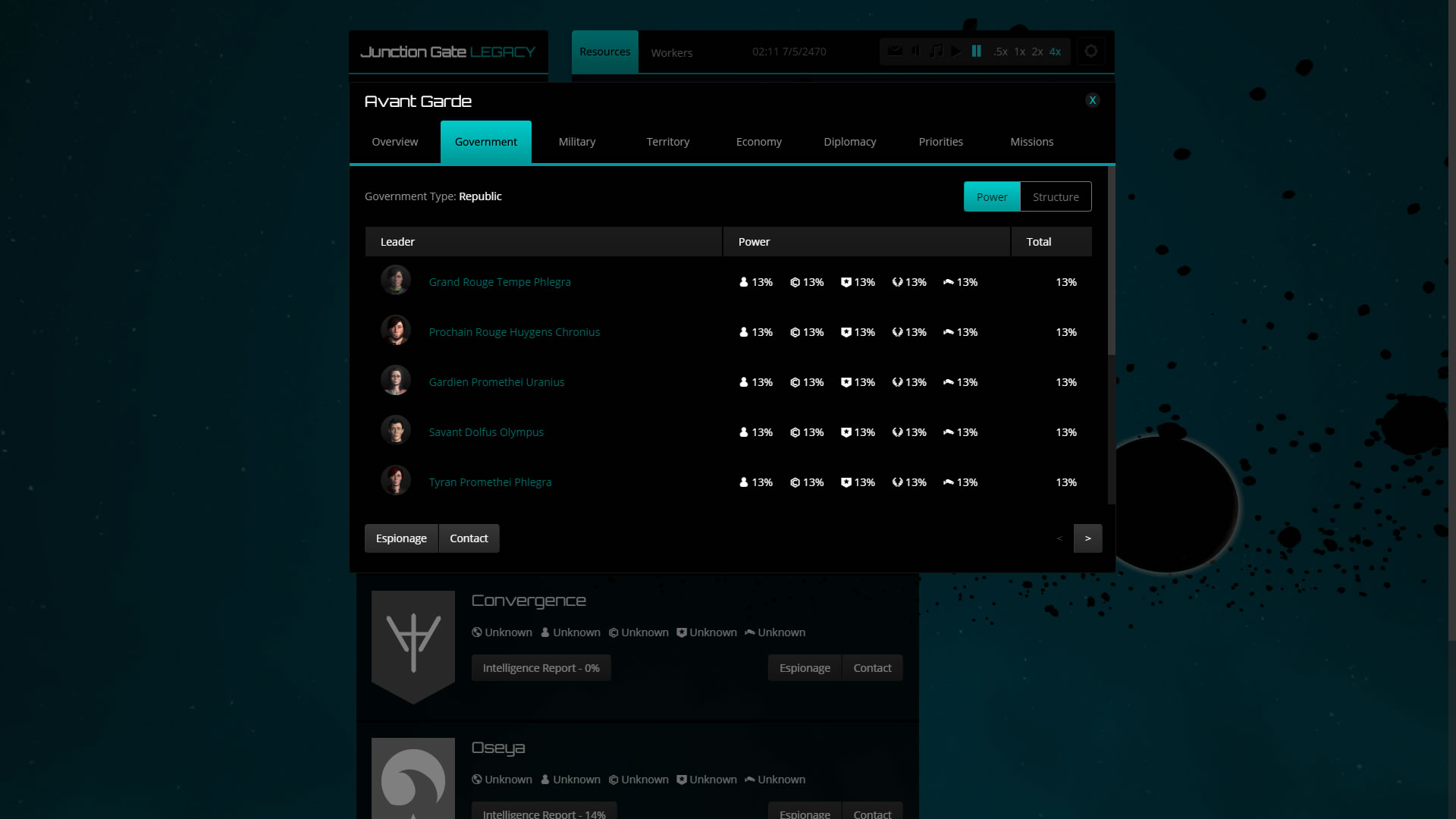 The structure section of the government tab shows off that faction's chain of command and the roles that are associated with each title. There are six different types of government, each faction has unique set of titles, and the number of roles and the composition of the faction governments can change with each playthrough. 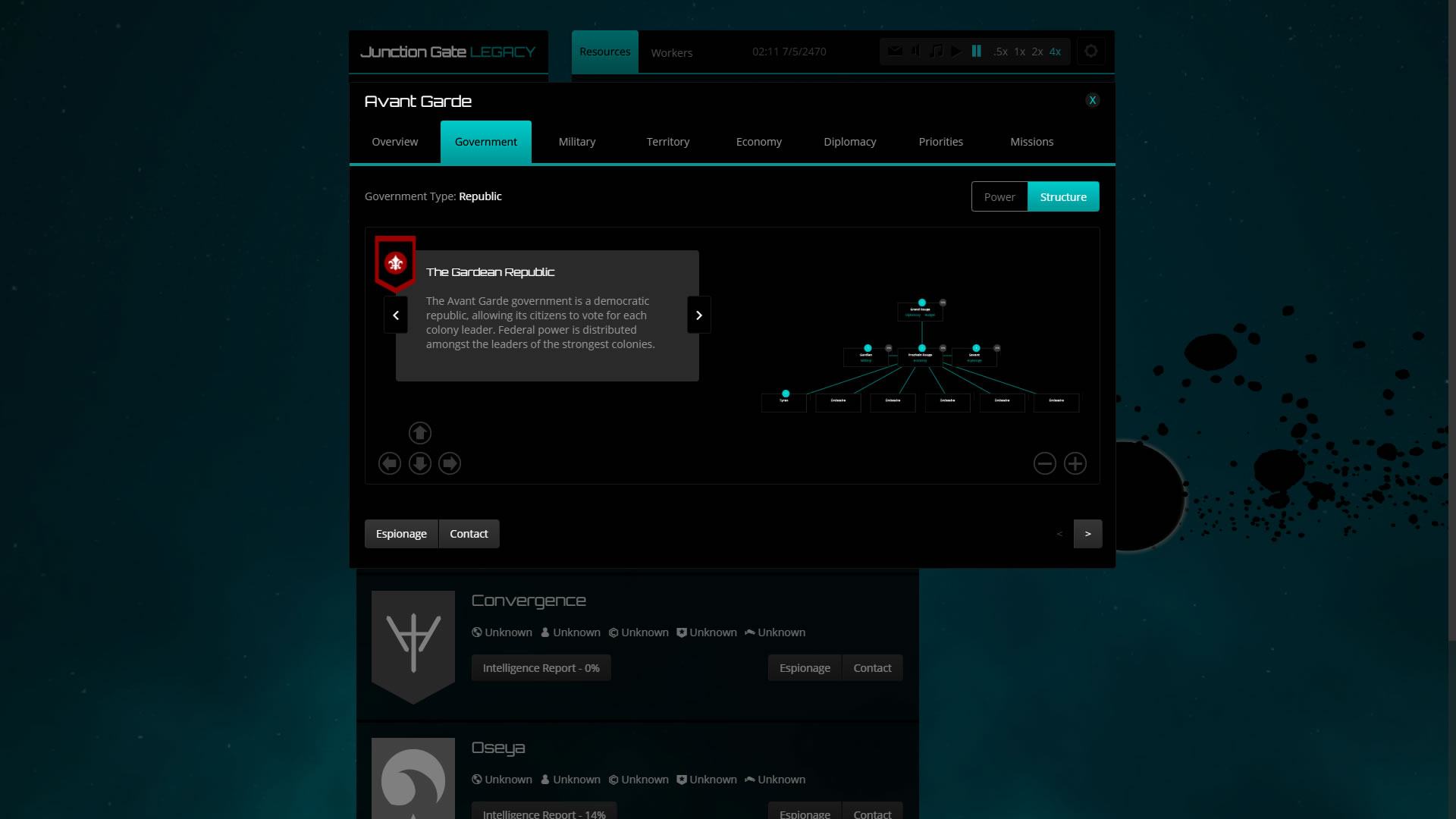 The structure diagram is interactive and you can step through each role in a tour or zoom and pan it yourself. 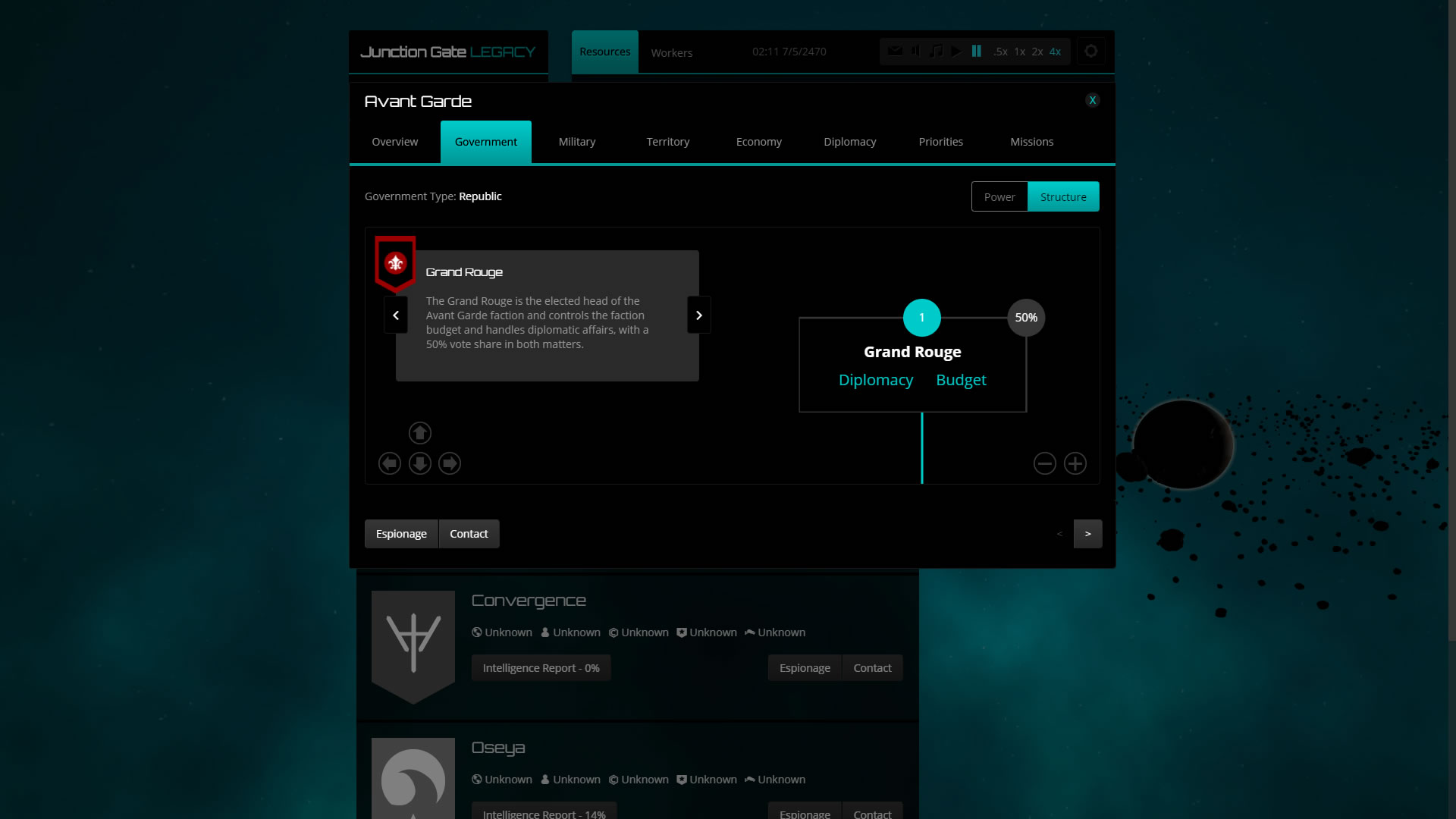 The government type will change how you interact with the faction governors. Some factions will allow their governors to negotiate directly while others will defer to their leaders before engaging with you. The behavior of some factions may be completely changed by assassinating or blackmailing a single leader, while in others the power is more distributed.

When you unlock the government tab for a faction, you also unlock the contact information for all of that faction's governors. The faction system has been reworked so that each colony has its own governor and you can interact with all of them. Each faction may have up to 10 governors and you'll be able to choose to play with 5, 10, or 15 factions when you first start the game. The game will then select the factions form a potential pool of 31 factions, each with their own unique lore. 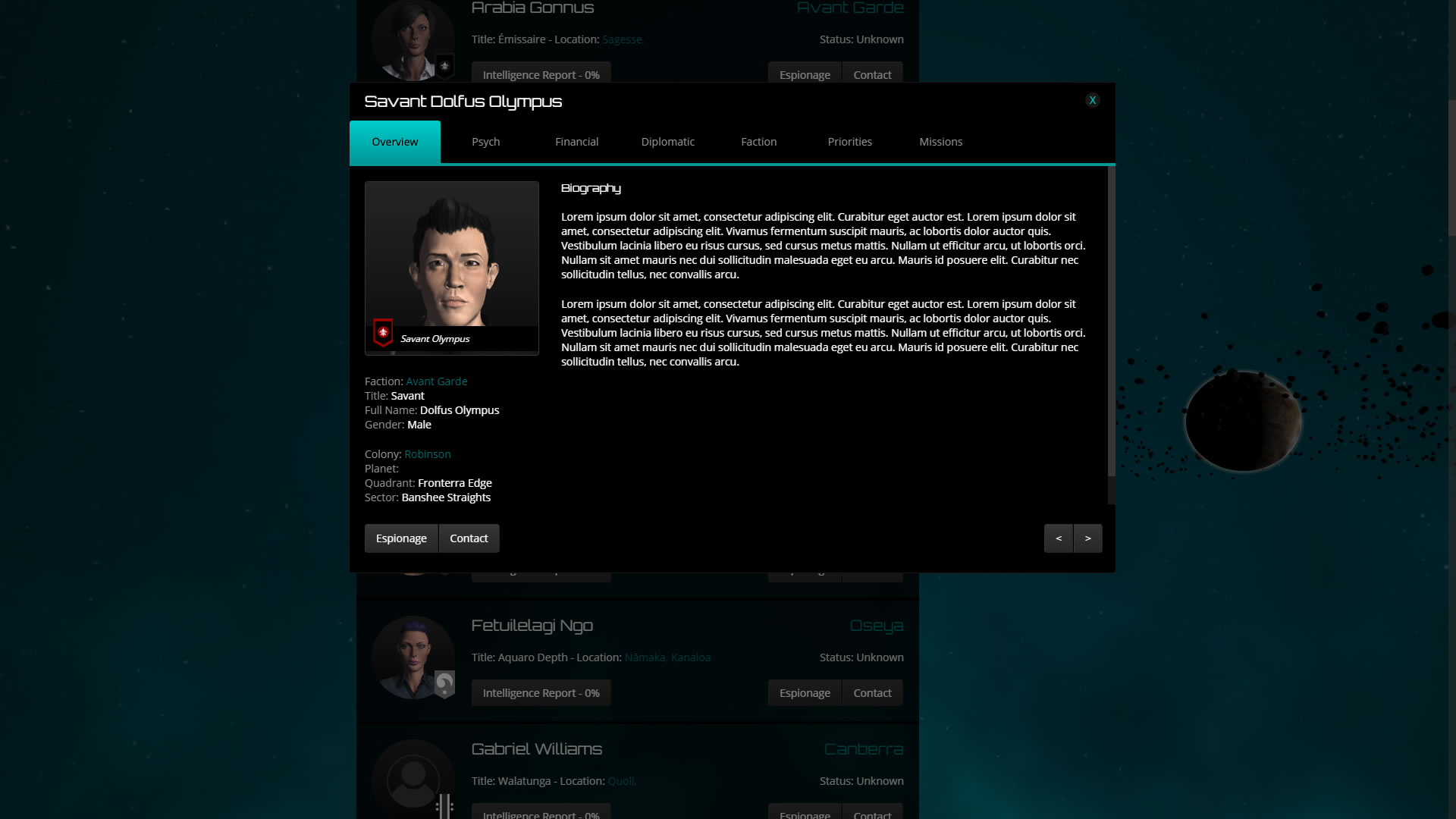 Just like with the factions, you'll be able to do espionage missions with each governor. Right now, you can just unlock the personnel tabs, but I'll soon be working on a blackmail system to go with diplomacy gameplay. 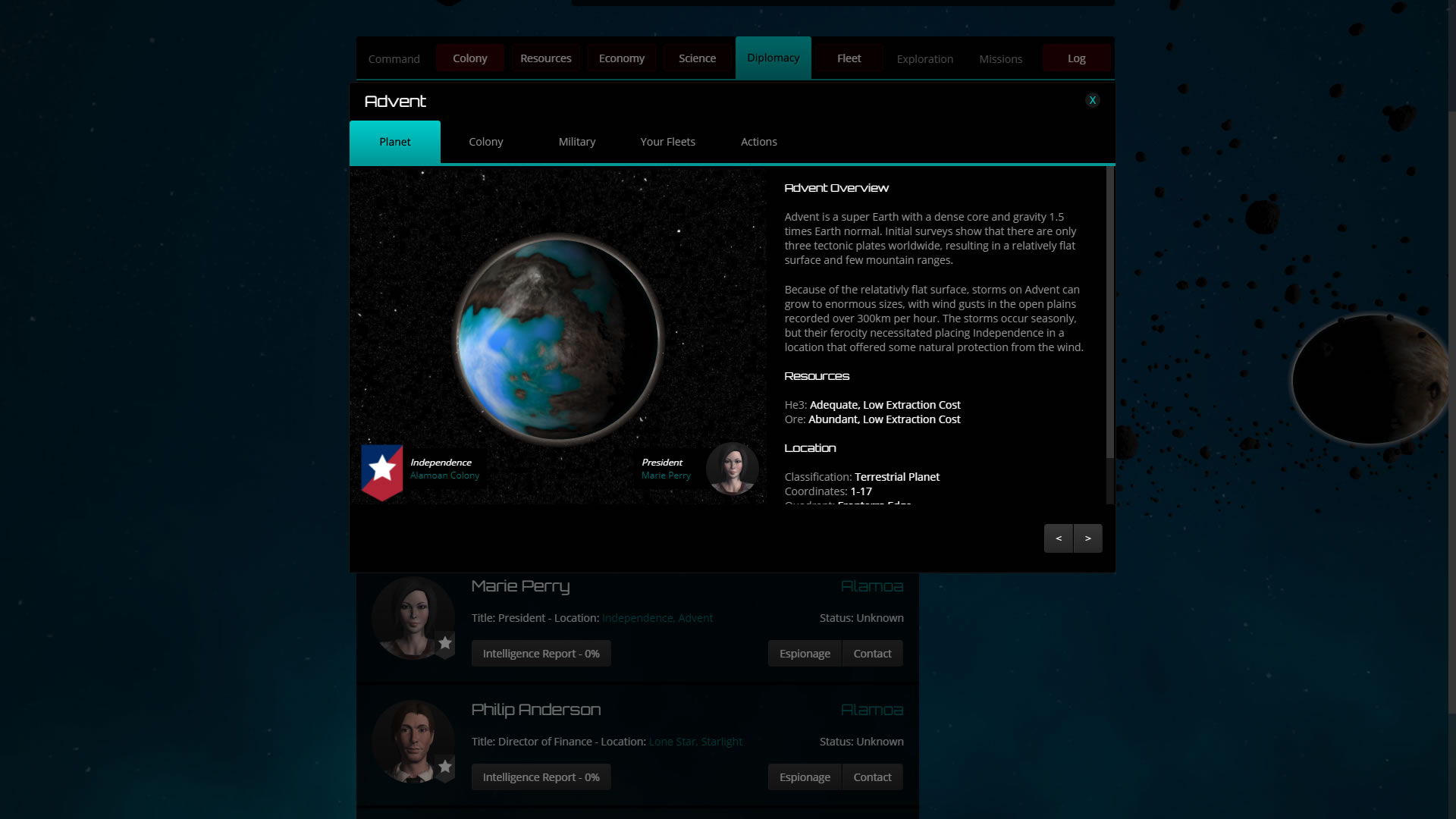 With the faction overhaul, I've also taken some time to rework some aspects colonies and exploration, though expect more of that to come in the future. Each planet modal will now showcase the planet in 3D, along with a reworked UI. The lore for each planet and colony will be unique. And, while I only have placeholder planets in right now, each planet will also be unique and fit in with the location's lore. My hope is that this will make exploration a lot more rewarding.

As you might guess, the above changes to the game mean that it will be receiving a lot of new content and it will take some time to create it. Right now, in addition to working the gameplay systems, I'm spending a little time each day to work on character portraits, lore, and additional planets. Overall, I'm very excited about the direction the game is taking.

That's it for this month's update! In March, I'll continue working on the faction and espionage systems, but expect that my work will spill over into other areas as well because they are all connected. I also expect to put more work into the 3D version, but my primary focus is getting Legacy out as soon as possible.