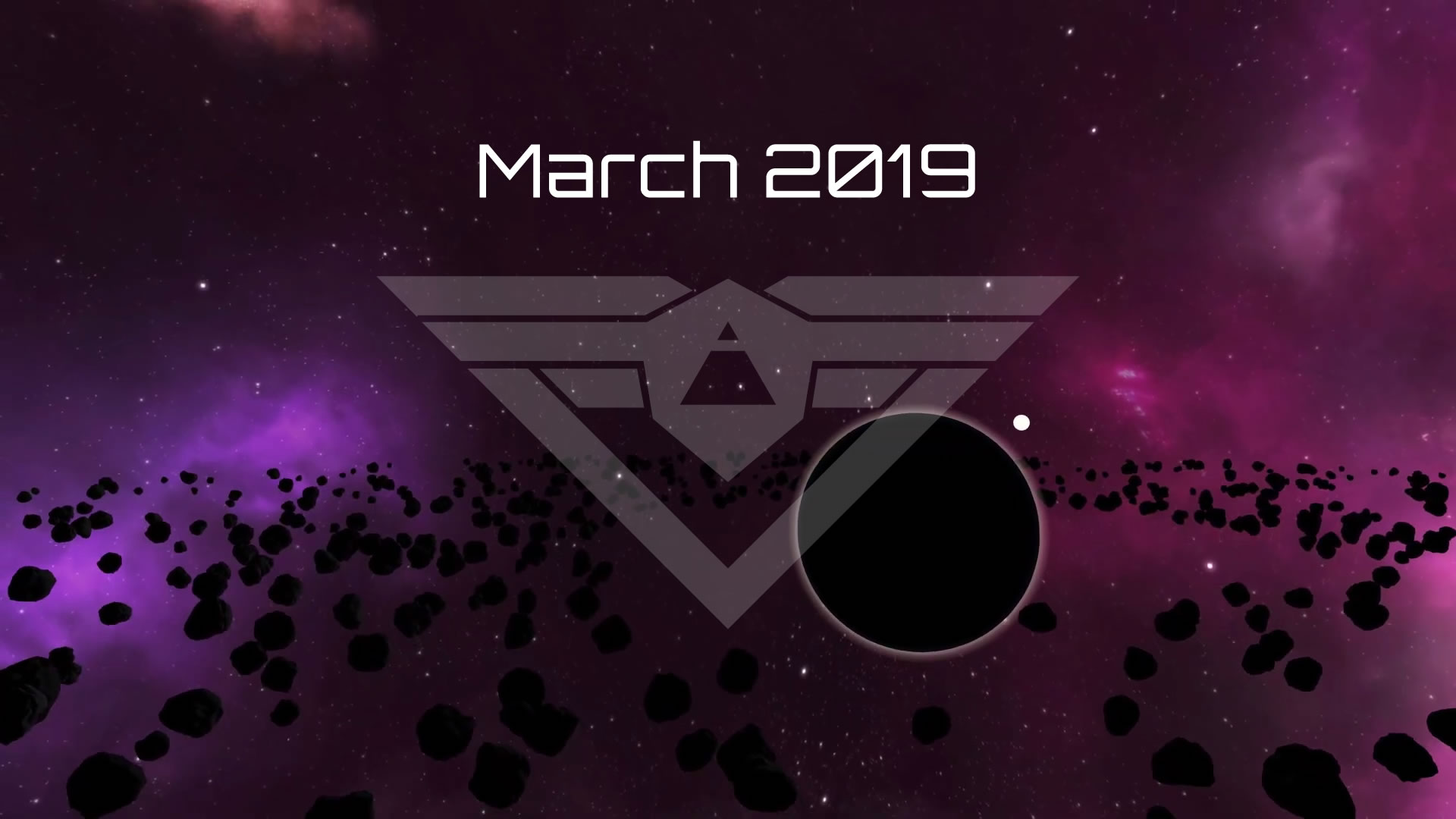 March is in the books for development and I'm excited to share some progress with you on both Junction Gate and Junction Gate Legacy. Both games have features that I'll be able to show now and some work that isn't quite ready for prime-time, but lays the foundation for future features.

In February and March, Caleb spent added the ability for the player character to crawl and roll. We've run into some interesting challenges getting collisions to work properly for crawling, but we're working to get those straightened out. 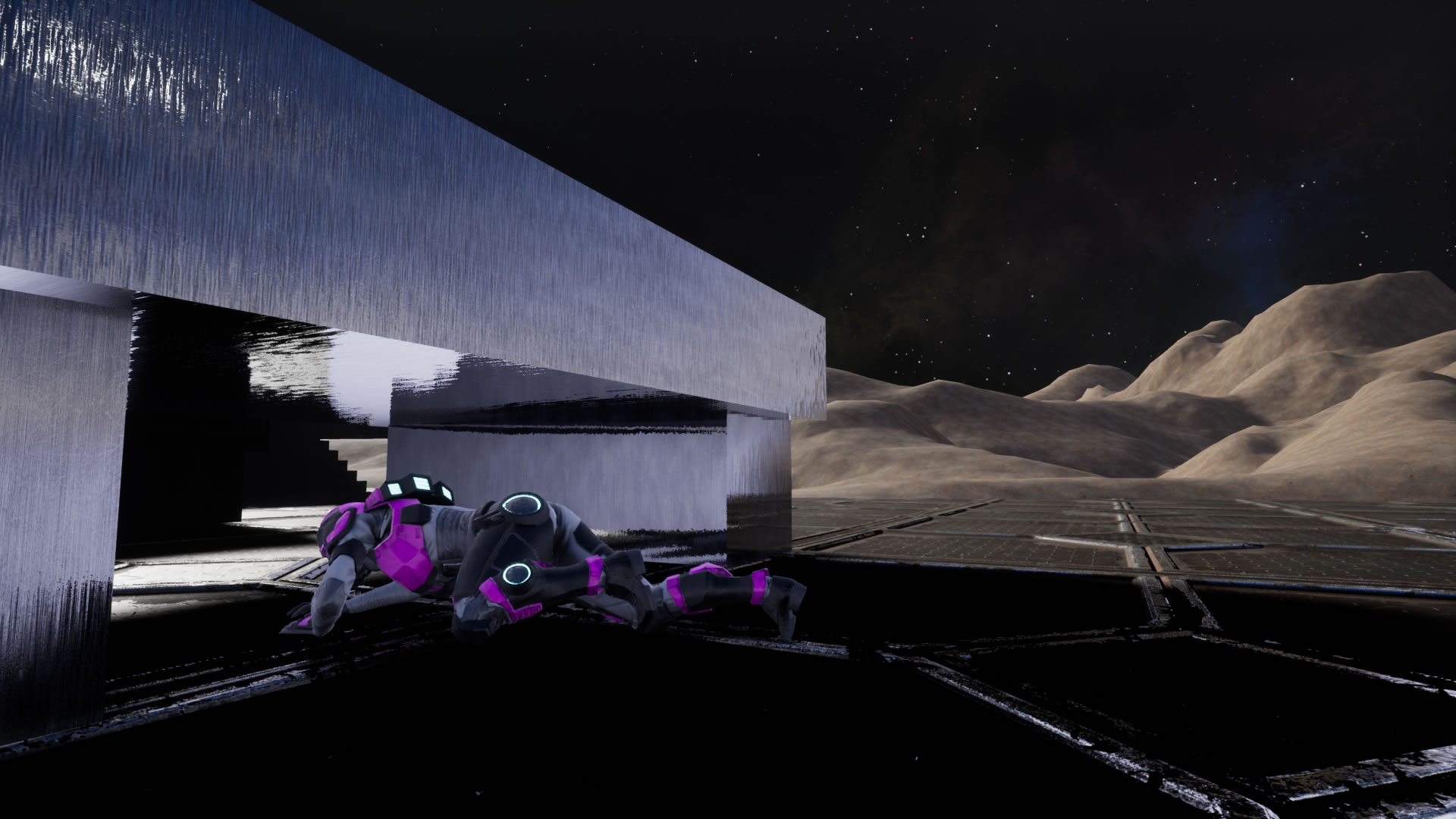 I've also started exploration into level streaming, experimenting with various entities in space, and some materials development. There isn't anything to share publicly just yet, but I hope to showcase more in the coming months. It's important to remember that it's still early in the development of the 3D version of Junction Gate, so we're prototyping, setting up future systems, and figuring out what works and what doesn't.

Priorities And Why We Make Them

It was a very busy month for JGL. I've continued working on factions and characters, adding features that will provide the basis for determining their behavior. For characters, priorities will dictate how each character in will allocate their budget and what they will pursue. Every character now also has a psych profile that is paired the priorities and the combination of the two will give that character their personality and allow them to have a different reaction to the same situation than other NPCs. 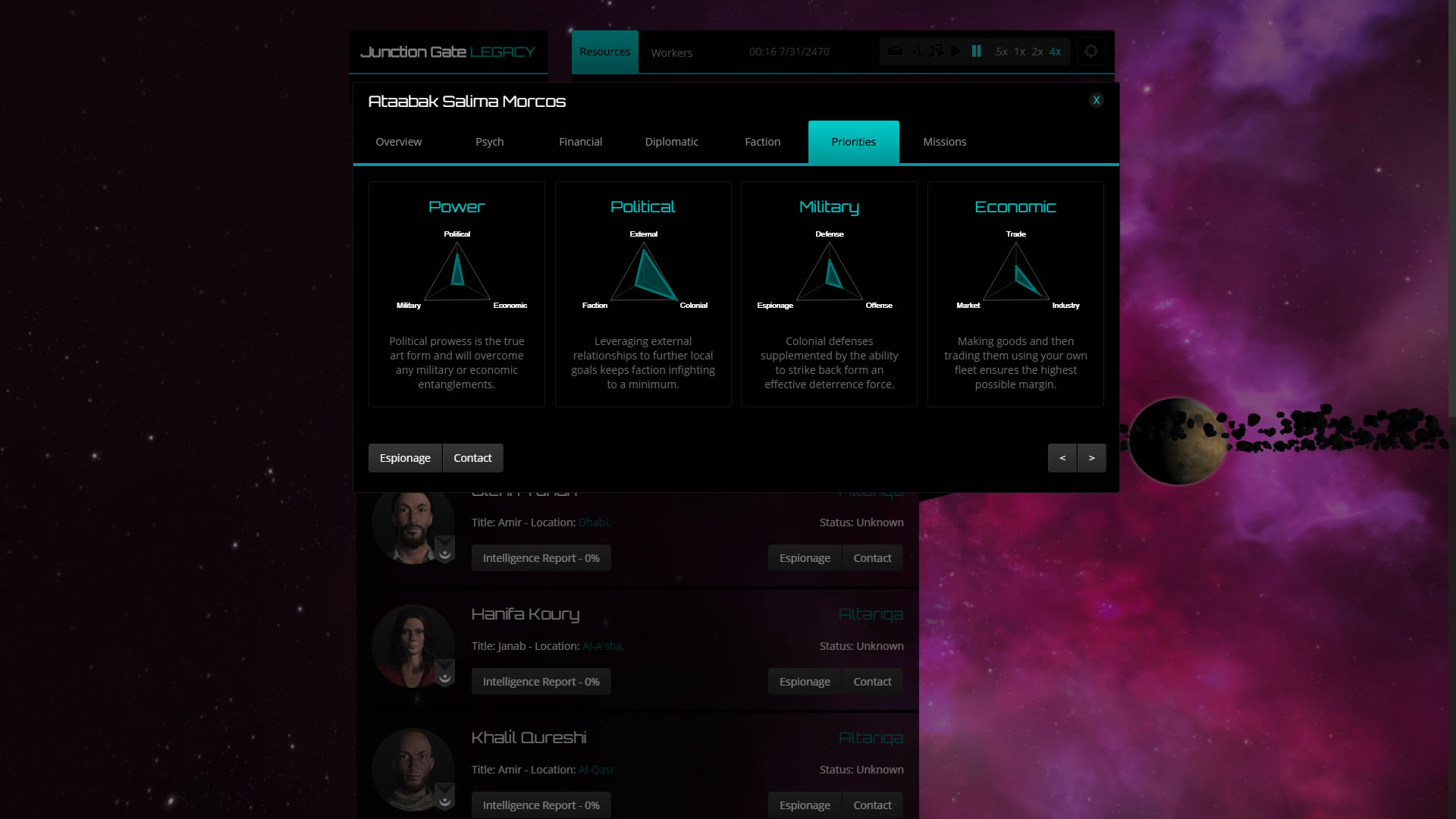 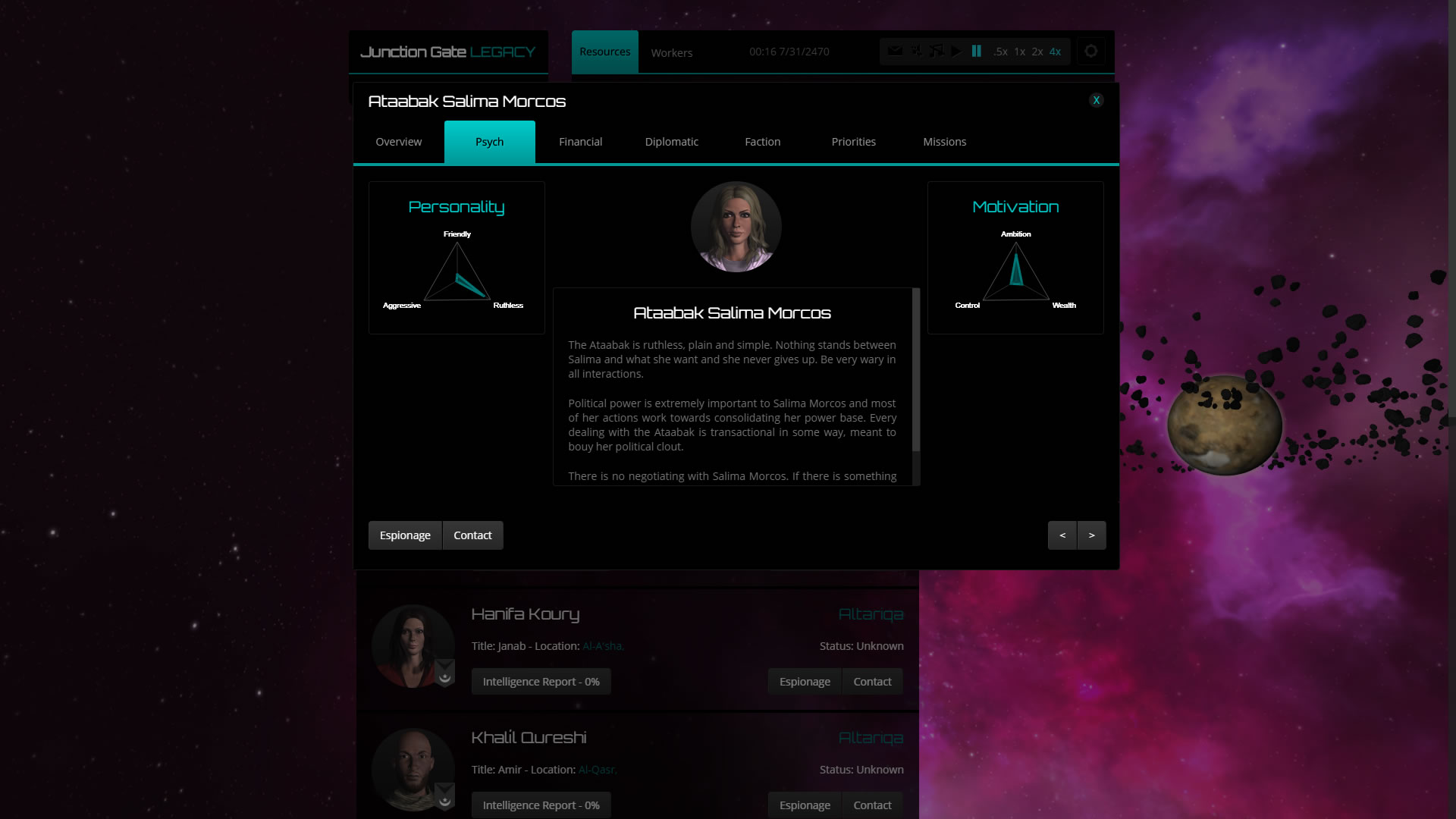 The stats for priorities and psych profiles are procedurally generated to an extent, but they also factor in other aspects like their faction or the specific colony they were born in. Some factions will be more friendly than others, but there could be an exception for NPCs born on a harsh planet that is distrustful of outsiders.

You'll be able to access these charts through espionage missions and with some practice, they'll give you insight into how to best interact with each NPC. For individuals, this will come into play more once the diplomacy features are finished. The systems are still being designed and developed, but my hope is that there will be real differences in the characters based on their unique set of goals and personality.

The other part of priorities that might be even more interesting, however, is the faction priorities. The priorities of each faction are determined by a mixture of the priorities of the colonial governors in that faction, but how that calculation is done will vary depending on the faction's government type. 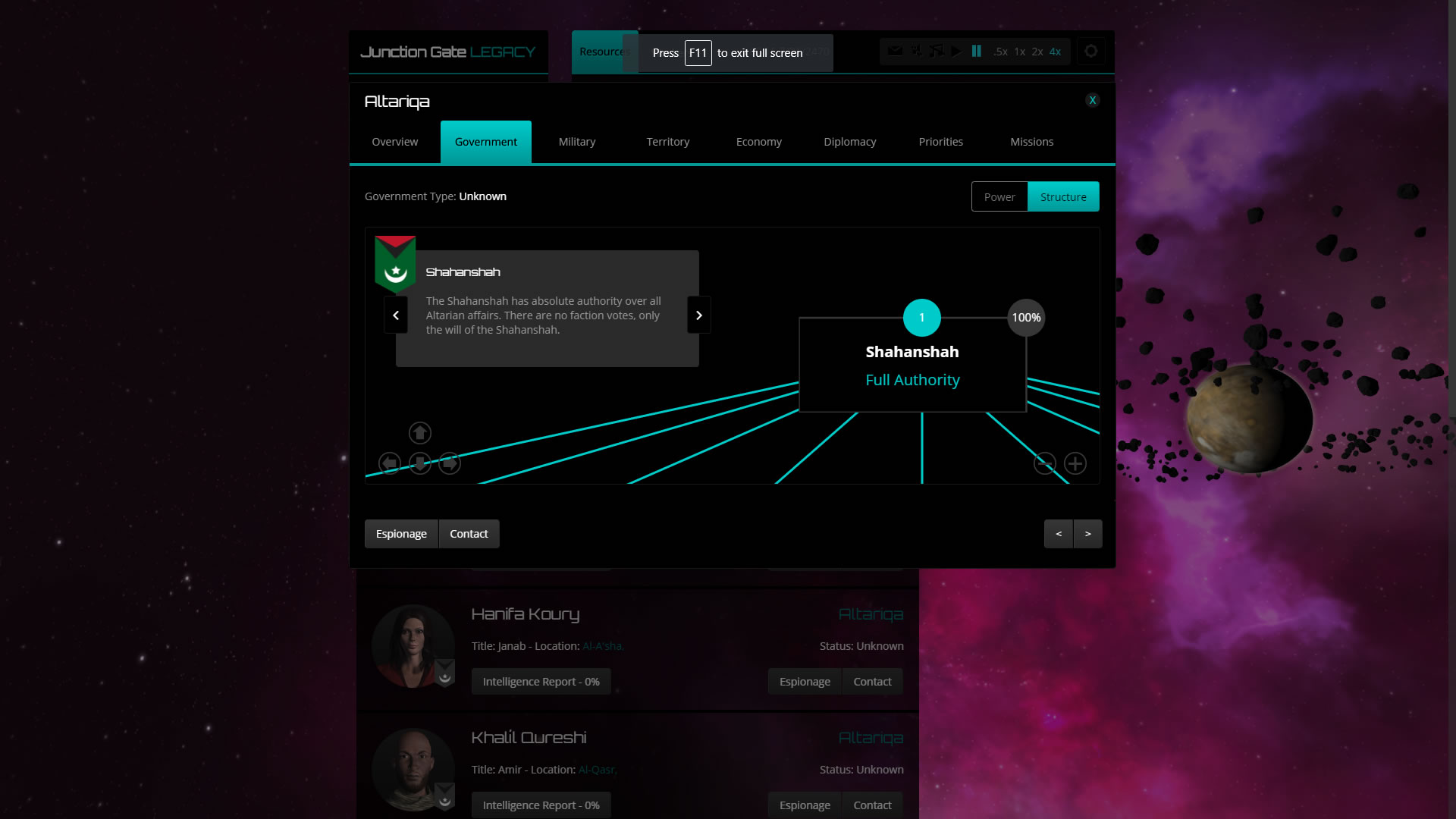 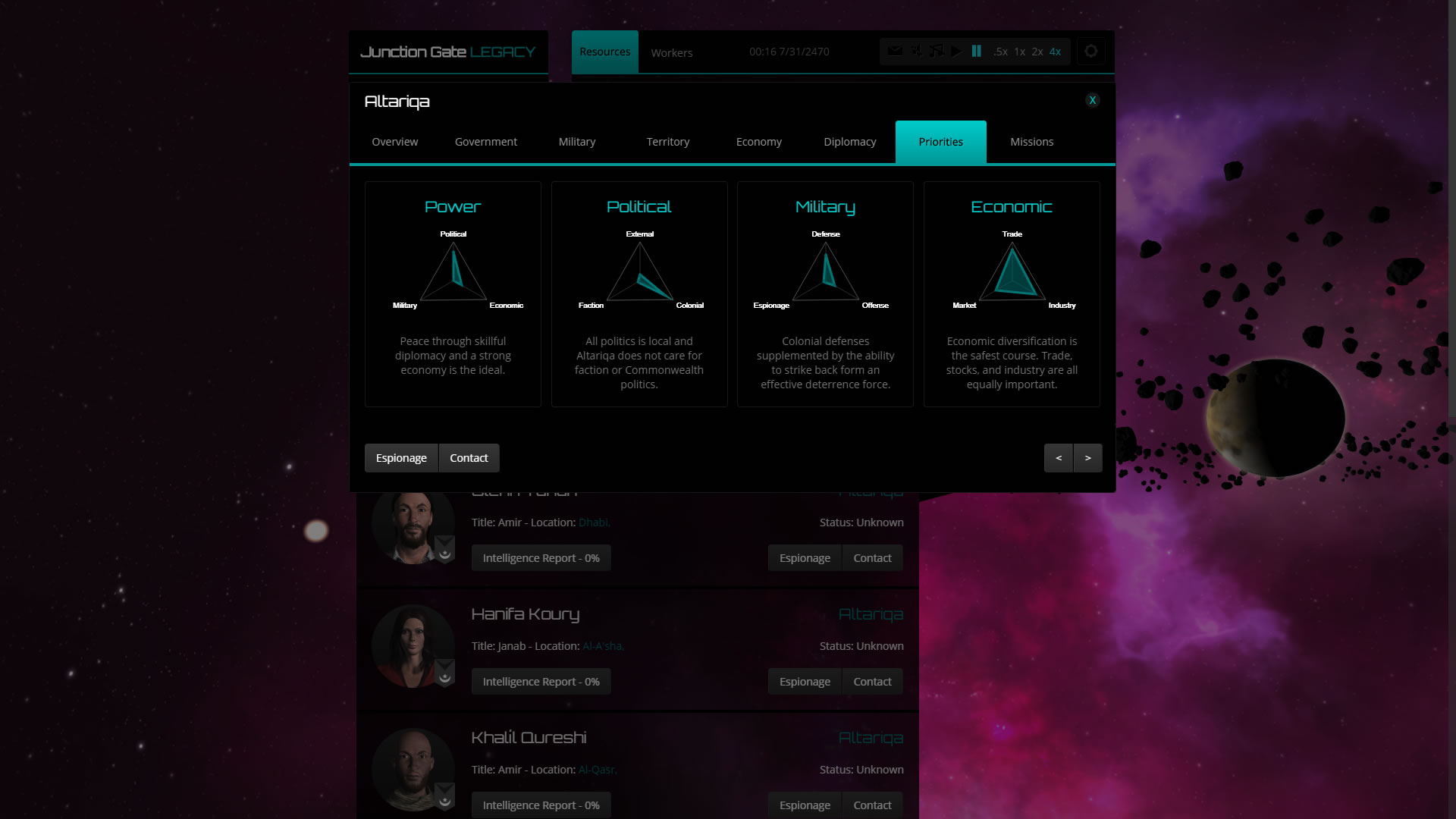 For example, in a monarchy, the leader of the faction will have absolute say in faction behavior and budgeting priorities. If a monarchy faction is violent and warlike, you could nudge them out of power using various means if you find the leader next-in-line for the throne more to your liking.

However, if the faction is a democracy and is warlike, just bumping off a single leader won't have as big an impact on the faction behavior because it is ruled by consensus. In that case, you'll have to employ a different strategy to achieve the same result.

Switching gears a bit, one of the biggest complaints I've received about the alpha version of Junction Gate is the economy. The stock market was based on some pseudo-random numbers and didn't always make sense as to why it went up or down. Managing a company was confusing and had a number of bugs. Trading is broken. Also, many of you have requested other ways to make money.

I spent a fair amount of time this month trying to figure out how to fix the economy. I won't go into all of the details until it's fully implemented, but I think I've come up with a design that will address the issues and tie in nicely with the new factions and colonies systems. That's a bit of a tease, but I can show the first part of the refactor in regards to starting a corporation.

First, here's a quick peak at the current alpha version of creating a corporation. It's messy and pretty confusing. 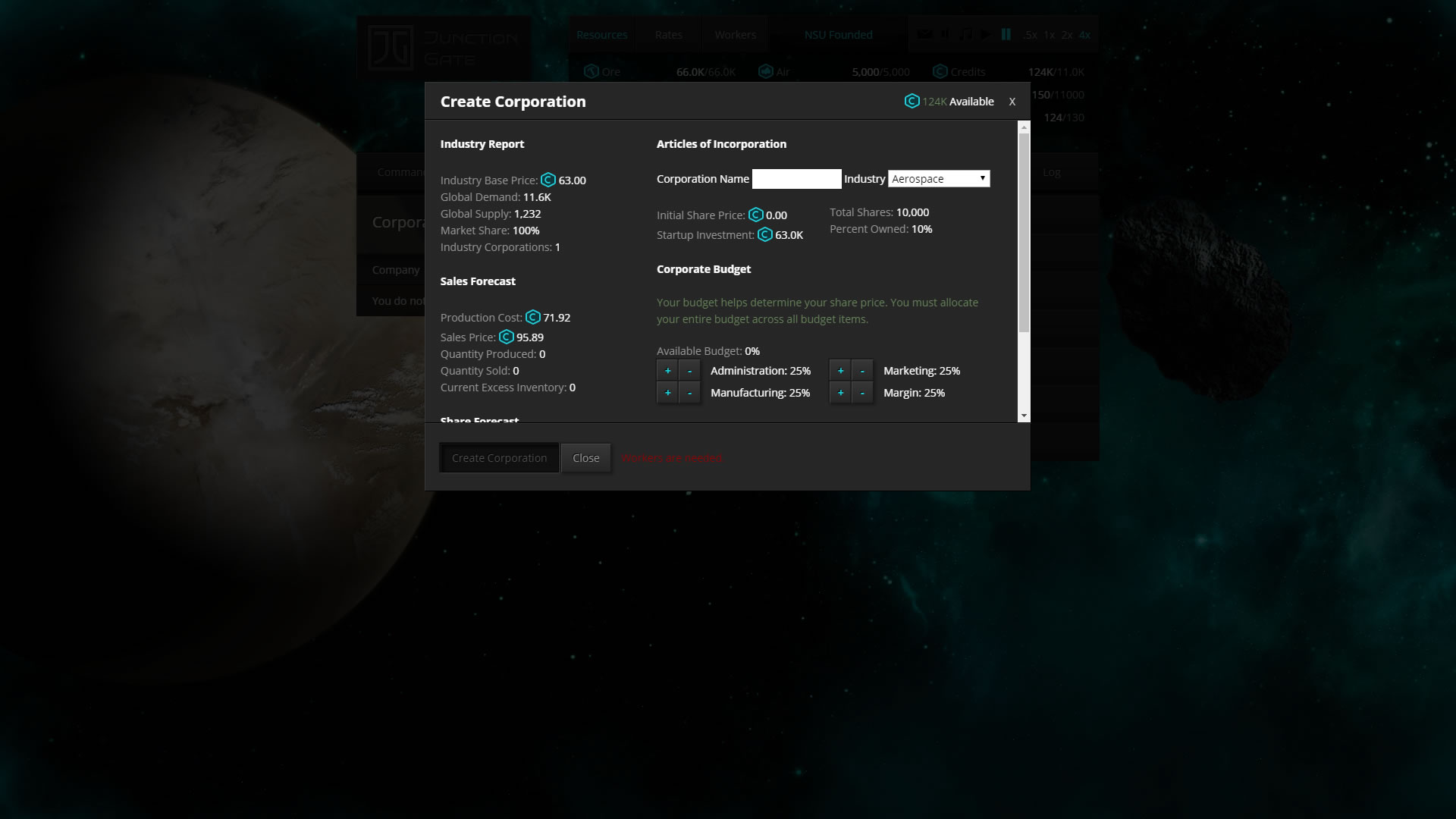 With the new design, I wanted to give it a better flow and to hopefully make it more understandable by copying real life more closely. 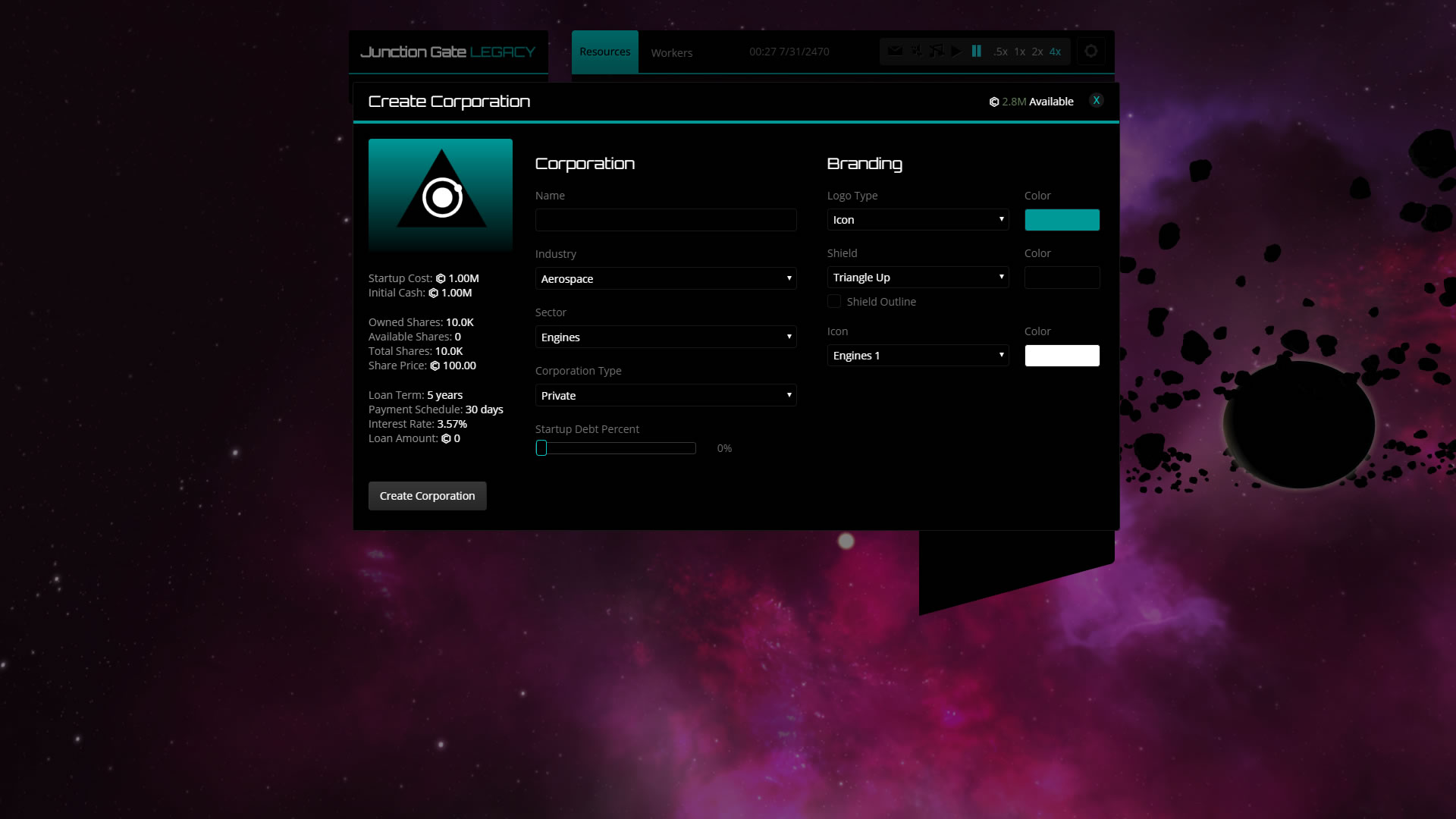 You'll be able to choose to start a business in one of 15 different industries (at current count). Each industry will have one or more sectors to choose from. 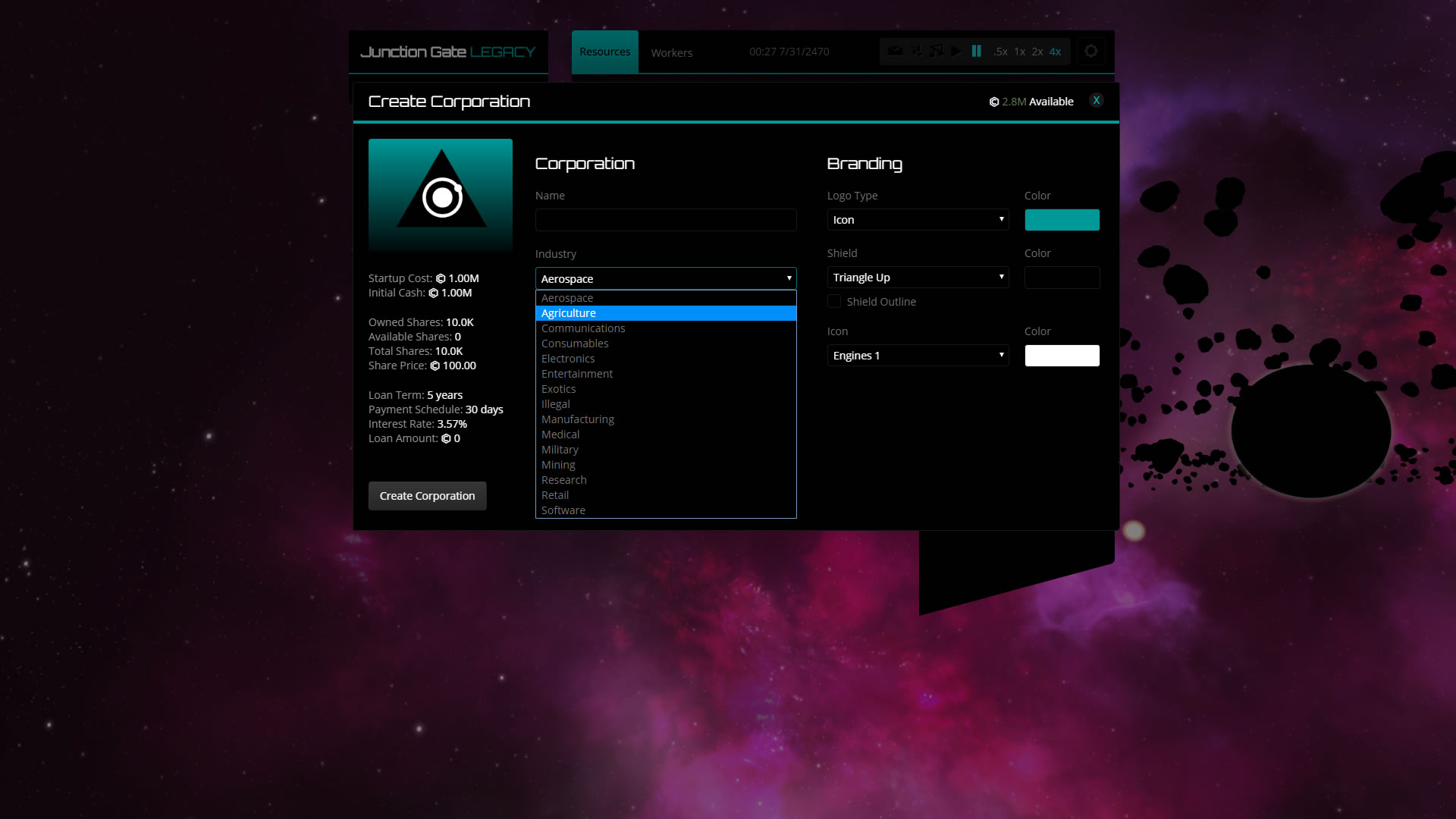 You'll also have a few different options for how to fund your company.

In addition to choosing your company type, you'll also be able to create a logo for your company using the new logo creator. Each industry sector will have a set of logos to choose from appropriate for that sector or you'll be able to use your company name. Eventually, each computer created company will also have a generated logo.

The economy is a big system to tackle and it is interwoven with the factions, diplomacy, travel, and the colonial systems, so I'll be bouncing back and forth between them all in the future.

You might have noticed from the screenshots that there is new background scenery. I'm experimenting with some different spacescapes and have updated the planet texture. I'll probably continue to tinker with this until the game is released, so it might not be 100% final. Here's a few screenshots to check out. 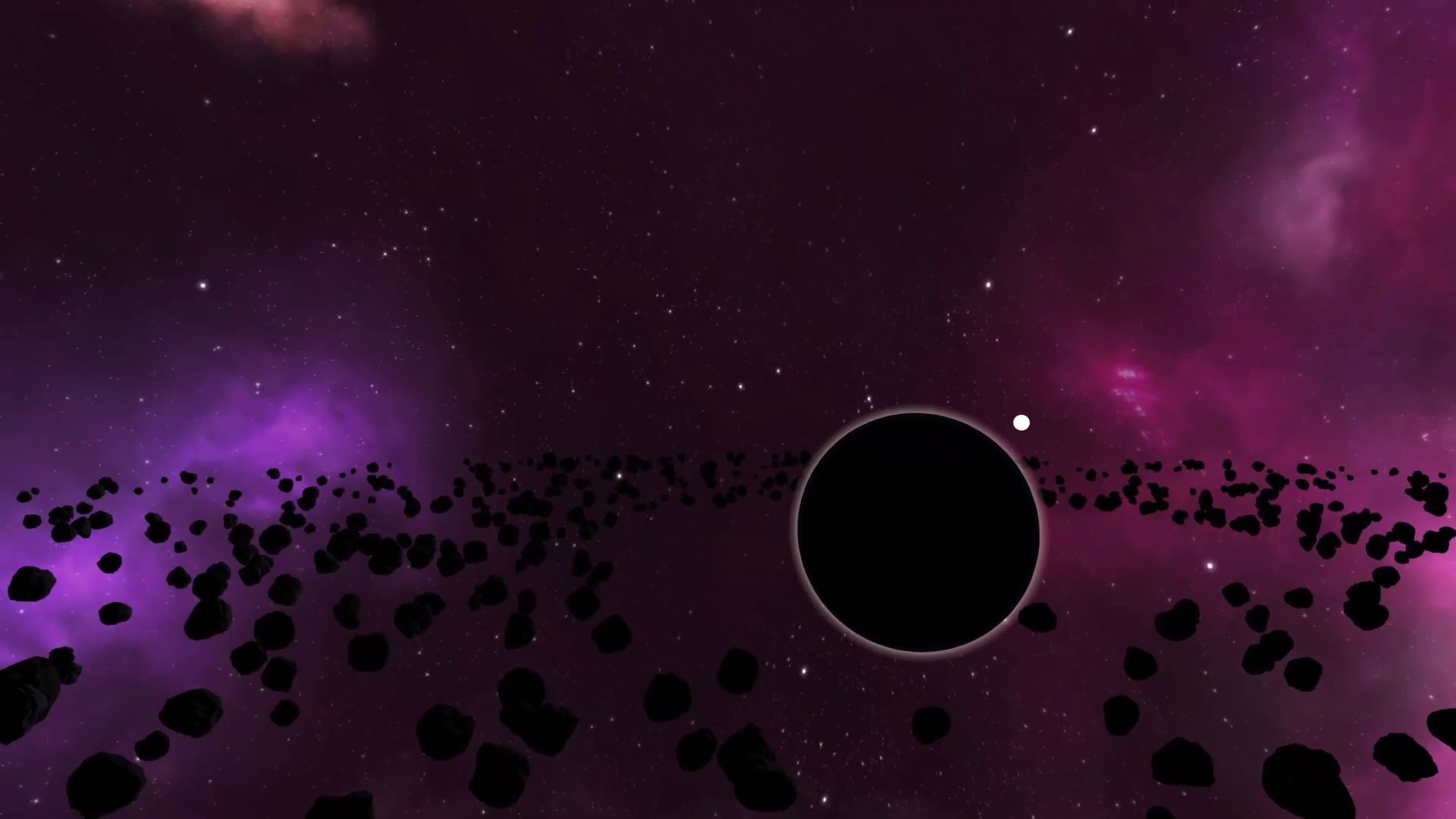 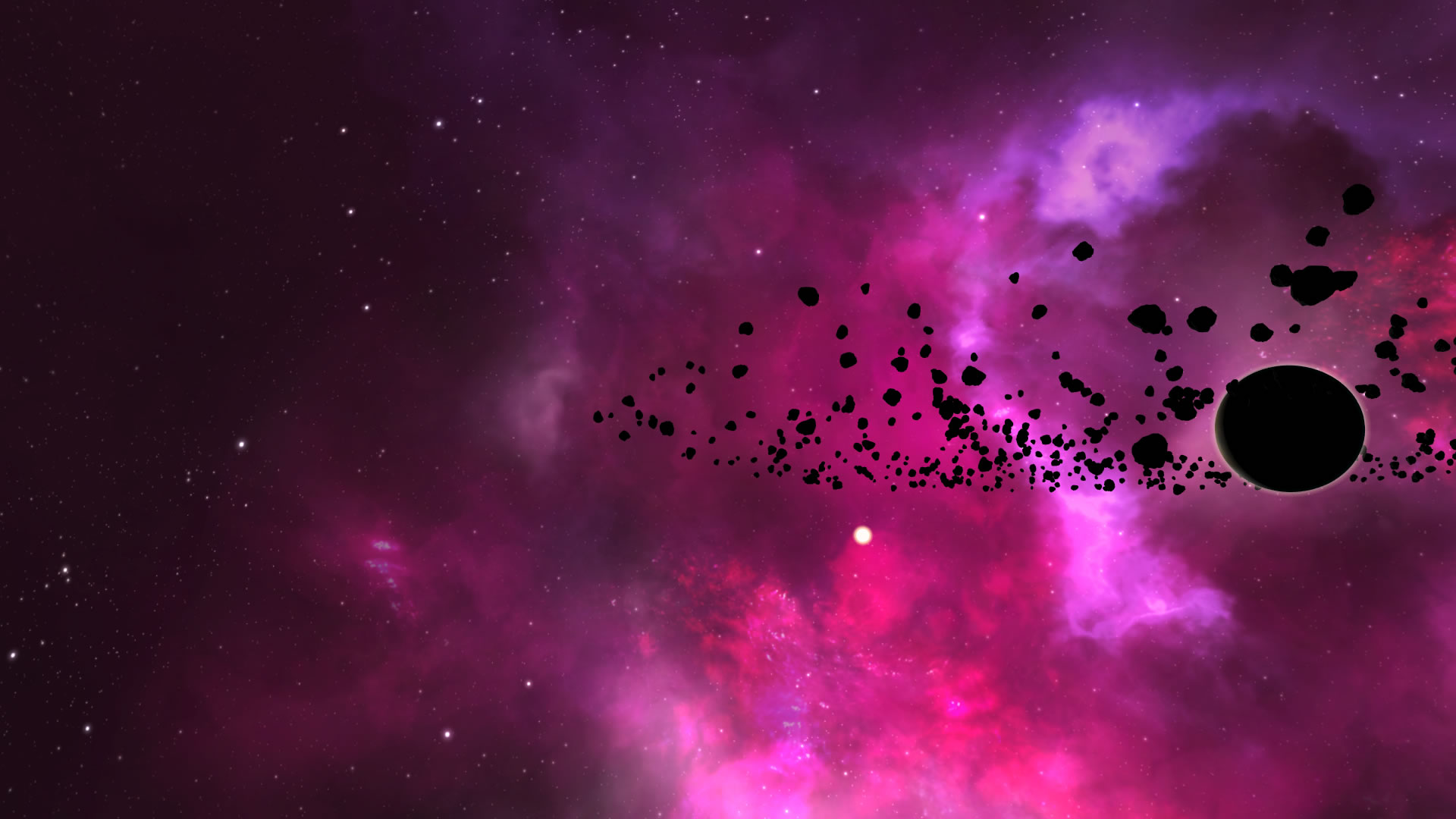 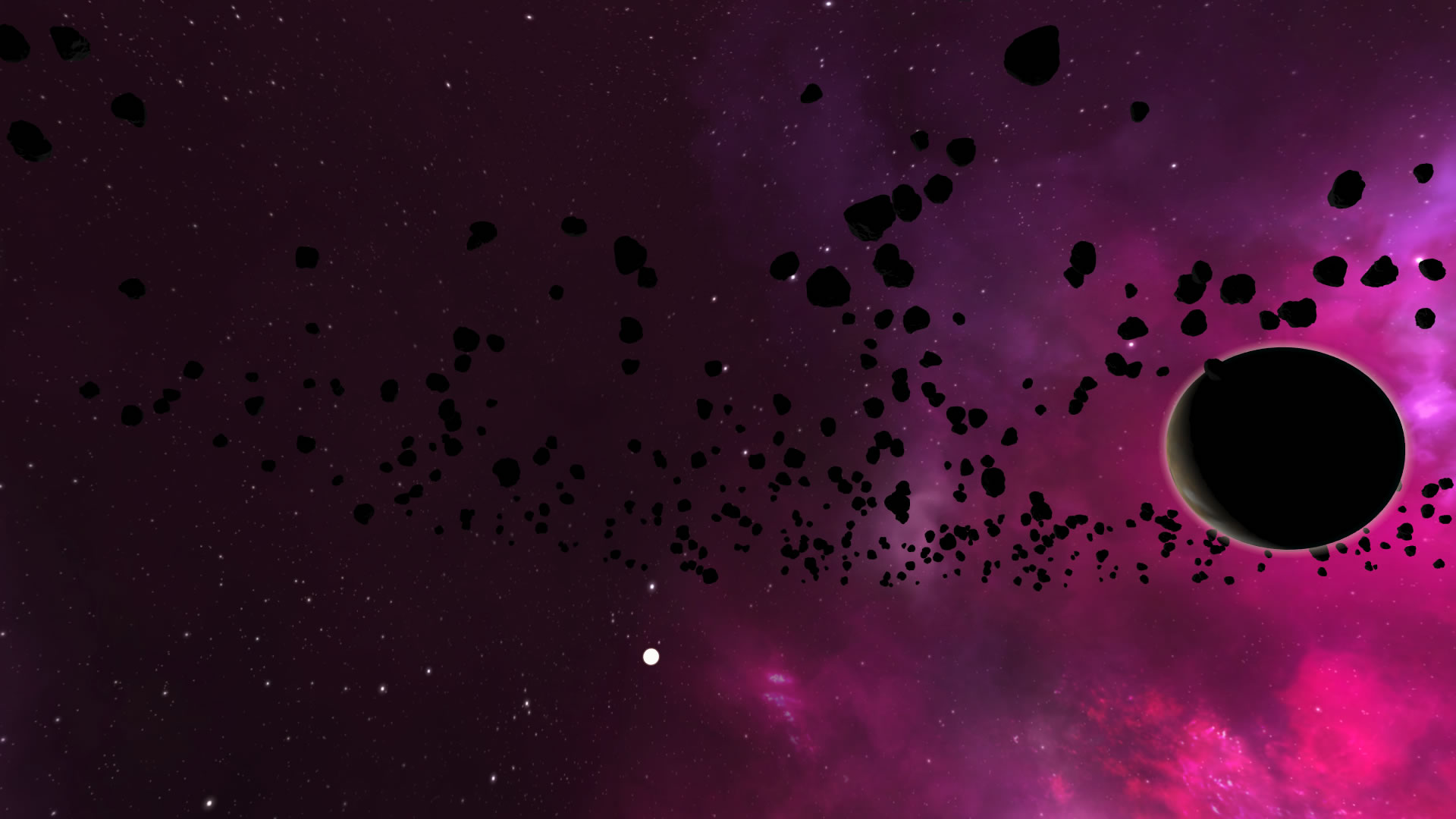 April will be a shorter month for development for me due to my schedule, but expect more work on the economy and factions as I continue to expand those systems. Have a great month!