This month's development update brings news for all three Junction Gate games. First up is a preview of some of the work on Junction Gate Legacy's latest features and a deeper dive into the design of the economy. Then comes a status update on Junction Gate Parallax. And finally, you'll get to see the first iteration of mining mechanics in the 3D version of Junction Gate.

As shared last month, a lot of effort is currently being put into refactoring and expanding the economy. Because the economy will touch nearly every part of the game, much of the work is behind the scenes and doesn't have a visual component to show off just yet.

Many of you in the past have expressed desire to have alternate ways of making money other than the stock market and the refactor of the economy is designed to provide multiple ways of earning money. 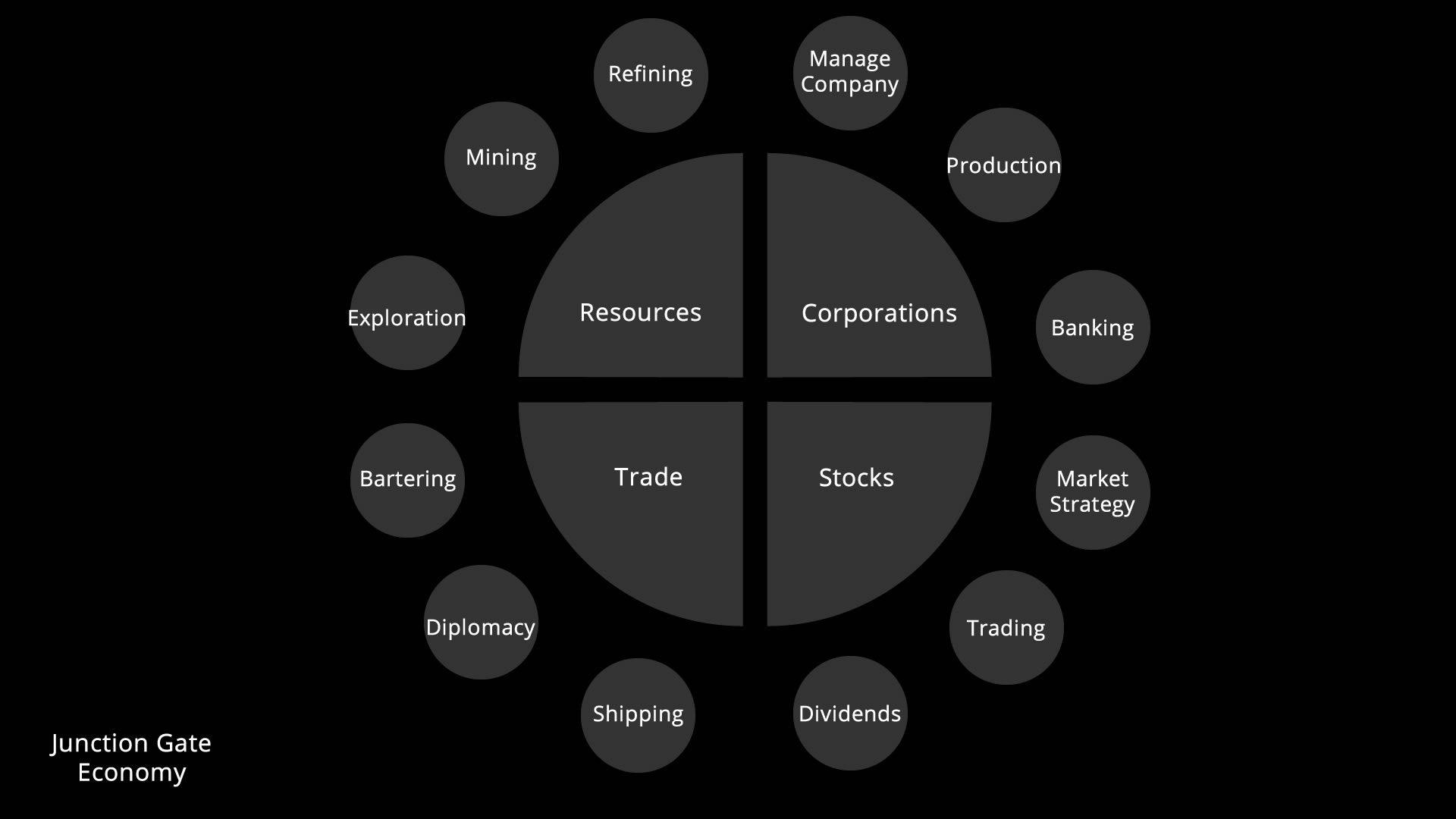 There are four primary pillars in the economy: resources, trade, corporations, and the stock market. From each of those pillars will extend a number of gameplay mechanics and they will all intermingle in various ways. Any one of the four will be optional; you'll be able to pick and choose how much or how little you use each method. If you wanted to, you could just sit in the casino the whole time and ignore everything else.

The raw ore that you mine can now be refined into other resources using the new refinery facility. Those resources will then be used for building special facilities or sold on the market. 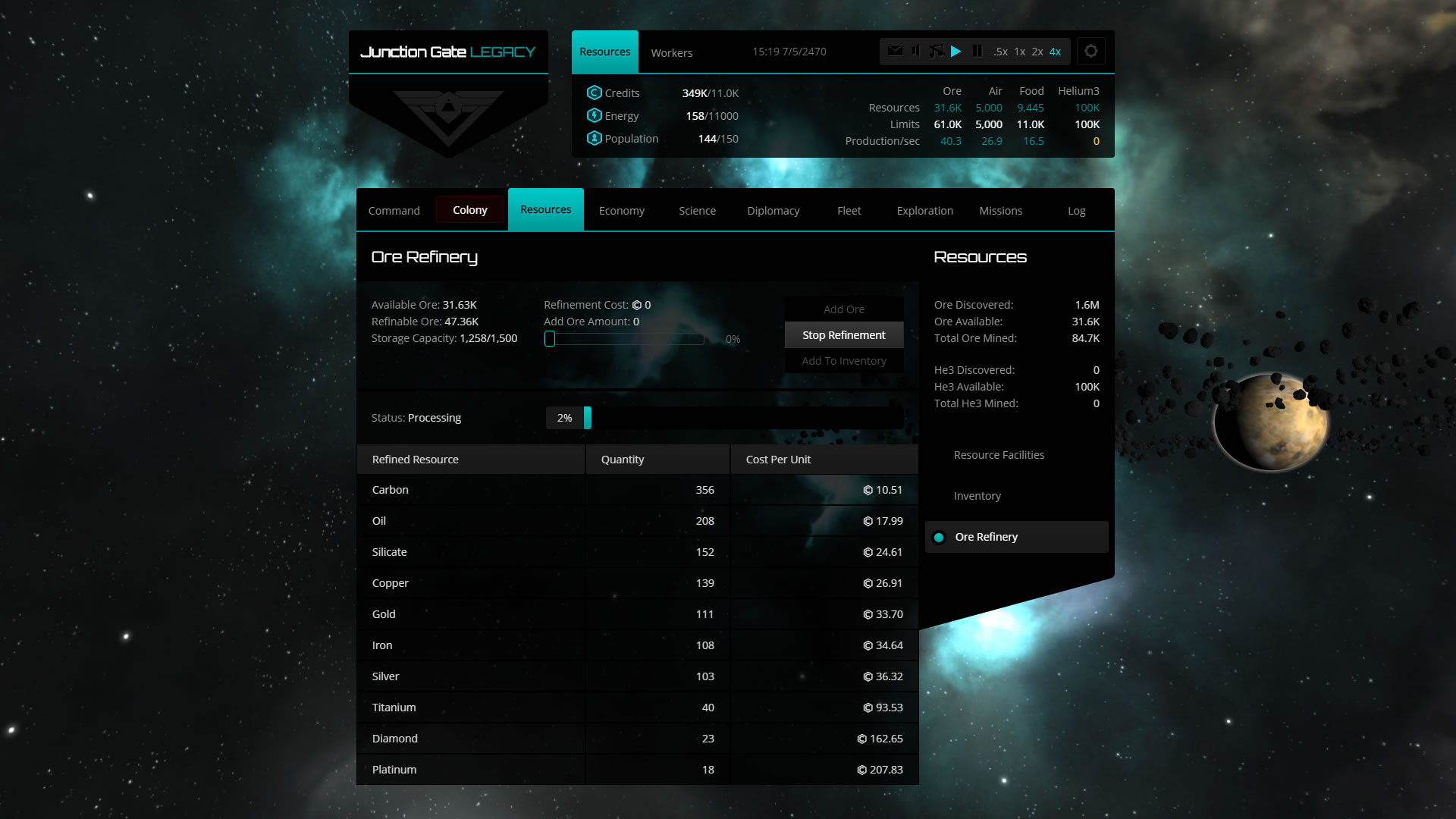 While the refinery can process ore, there is a lot of waste and you won't necessarily get all of the metals or resources you want with each batch. In the future, other planets will have deposits of those refined resources that you'll be able to mine directly. Finding those resources will give an added reason for exploration and also provide some interesting diplomatic situations as more than one faction might be interested in a particular resource-rich location.

Trading mechanics will include a few different opportunities for earning money. First, you'll be able to buy and sell (and barter!) with friendly factions and independent traders. Through diplomacy, you'll be able to expand your potential trading market.

If you're in a combative mood, you'll also be able to sit on shipping lanes and blockade a colony, intercepting any of their shipments and preventing their corporations from earning money, thus affecting their stock. However, there will definitely be diplomatic and probably military repercussions for enacting a blockade. 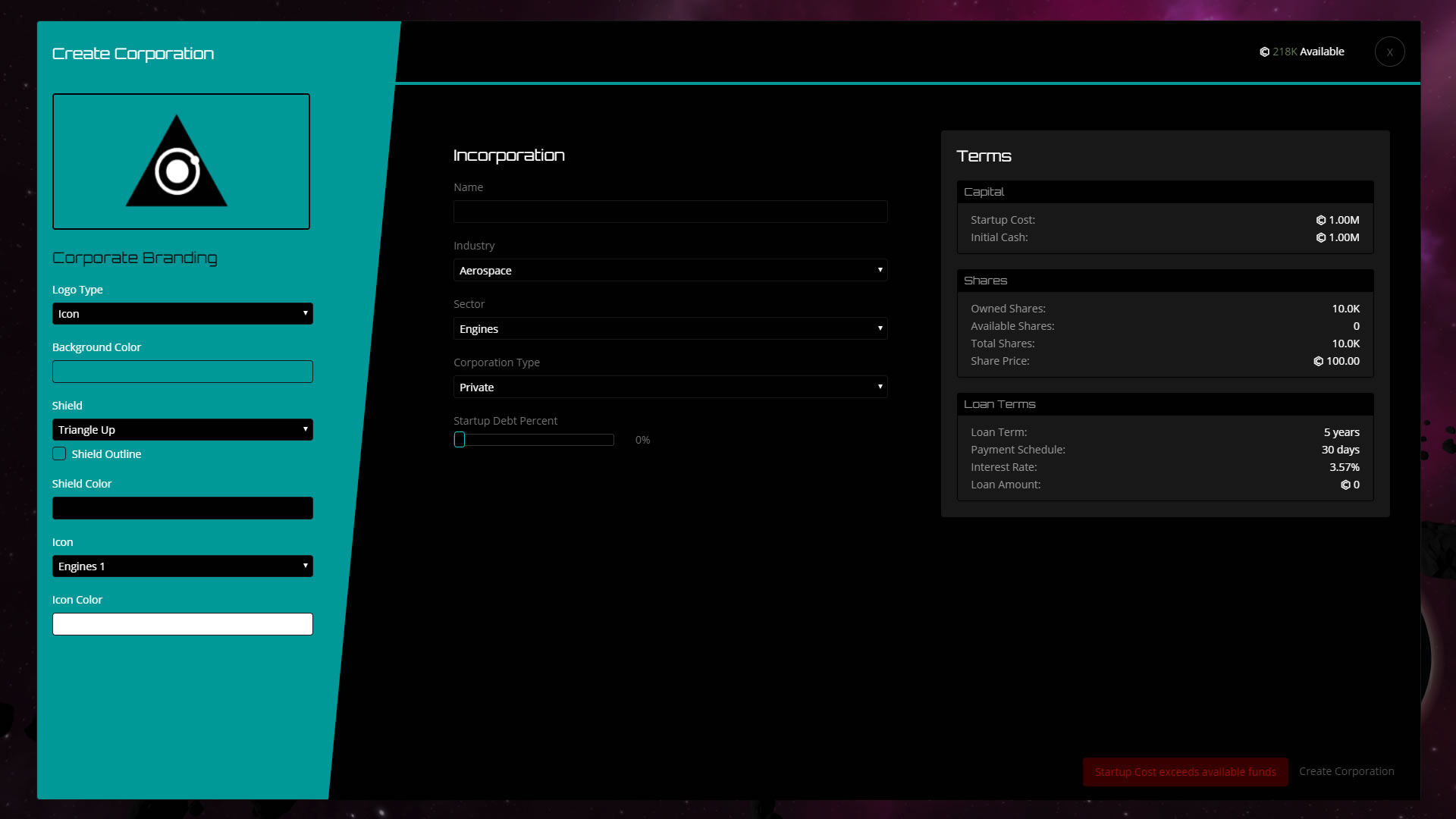 When you create a corporation, you'll first choose an industry and a sector. Within each sector, there are number of different products that you could manufacture. For each of those products, you'll need to build and upgrade production facilities, hire workers, purchase supplies, and manufacture and sell your products. 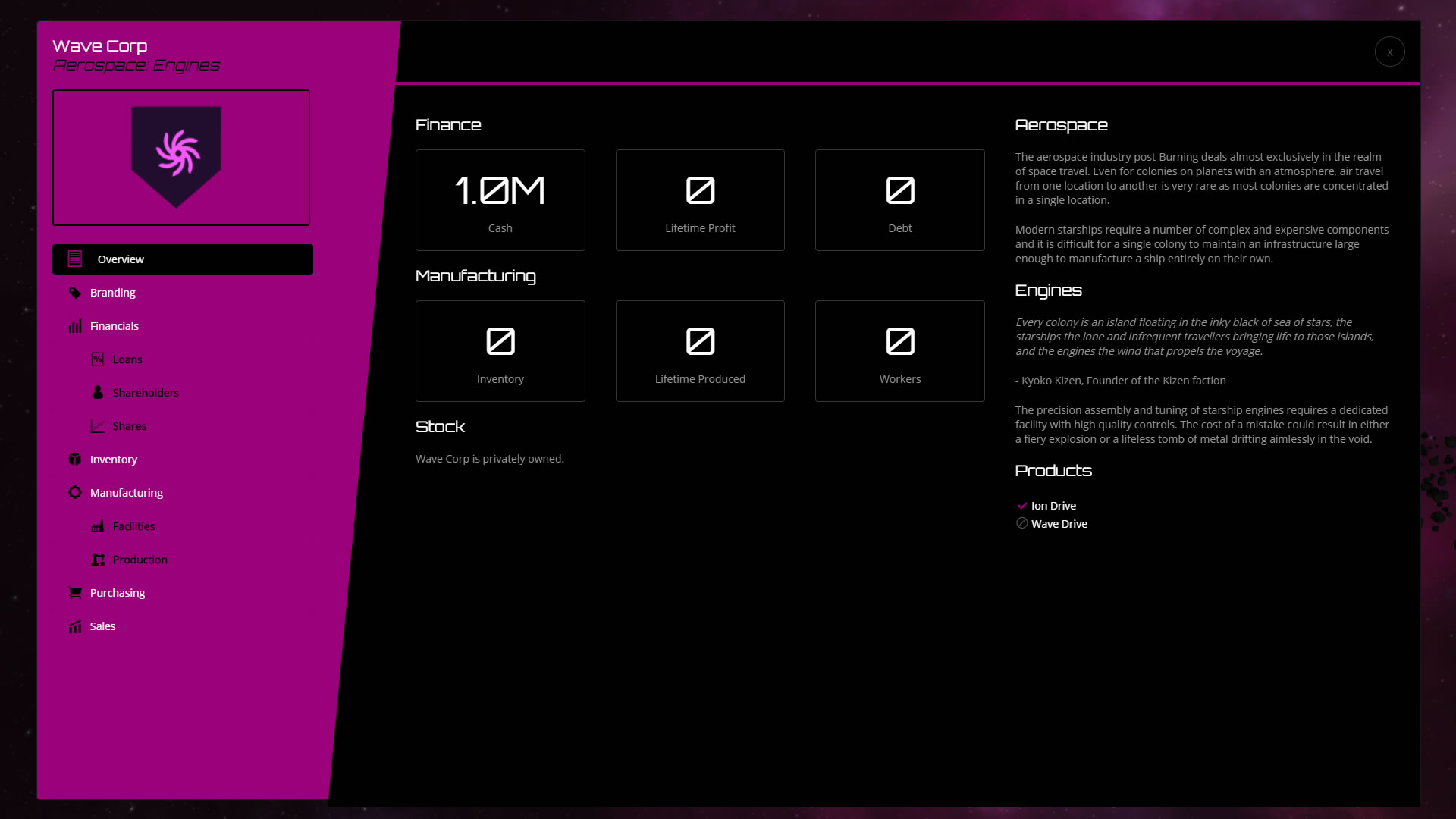 Managing a corporation will require you to deal with loans, shares, logistics, pricing, taxes and other common business challenges. Each product will require parts and supplies to manufacture, but you'll only be able to buy and sell with friendly factions, so your profit and market will be directly affected by your diplomacy style.

Likewise, if you want to list your company on the stock market, you'll need to join the Commonwealth, which will require specific diplomatic relationships. Until that point, your company will not be listed publicly, but will still be able to function privately.

There are currently 15 industries, 36 sectors, and 91 products in the game. These should provide the basis for a broad and interesting economy, but it will take quite a while to get everything wired up and working properly, in addition to writing all of the descriptions for each.

The stock market will function mostly the same as in the alpha, but with a few changes:

The change that I'm most excited about is that you'll be able to directly affect stock prices through actions outside of the market. Choosing to blockade a planet could trigger a butterfly effect, causing the stock of corporations on the planet to tank, the finances of that faction to plummet, while other competing companies pick up the slack. Then you'll have to deal with the diplomatic fallout.

All of this is going to take quite a bit of time to implement, so I appreciate your patience as I work through the gritty details of coding. Once it's up and running, I expect that there will also be some spectacular bugs while testing and unintended chains of events while playing, so it'll be interesting to watch unfold. 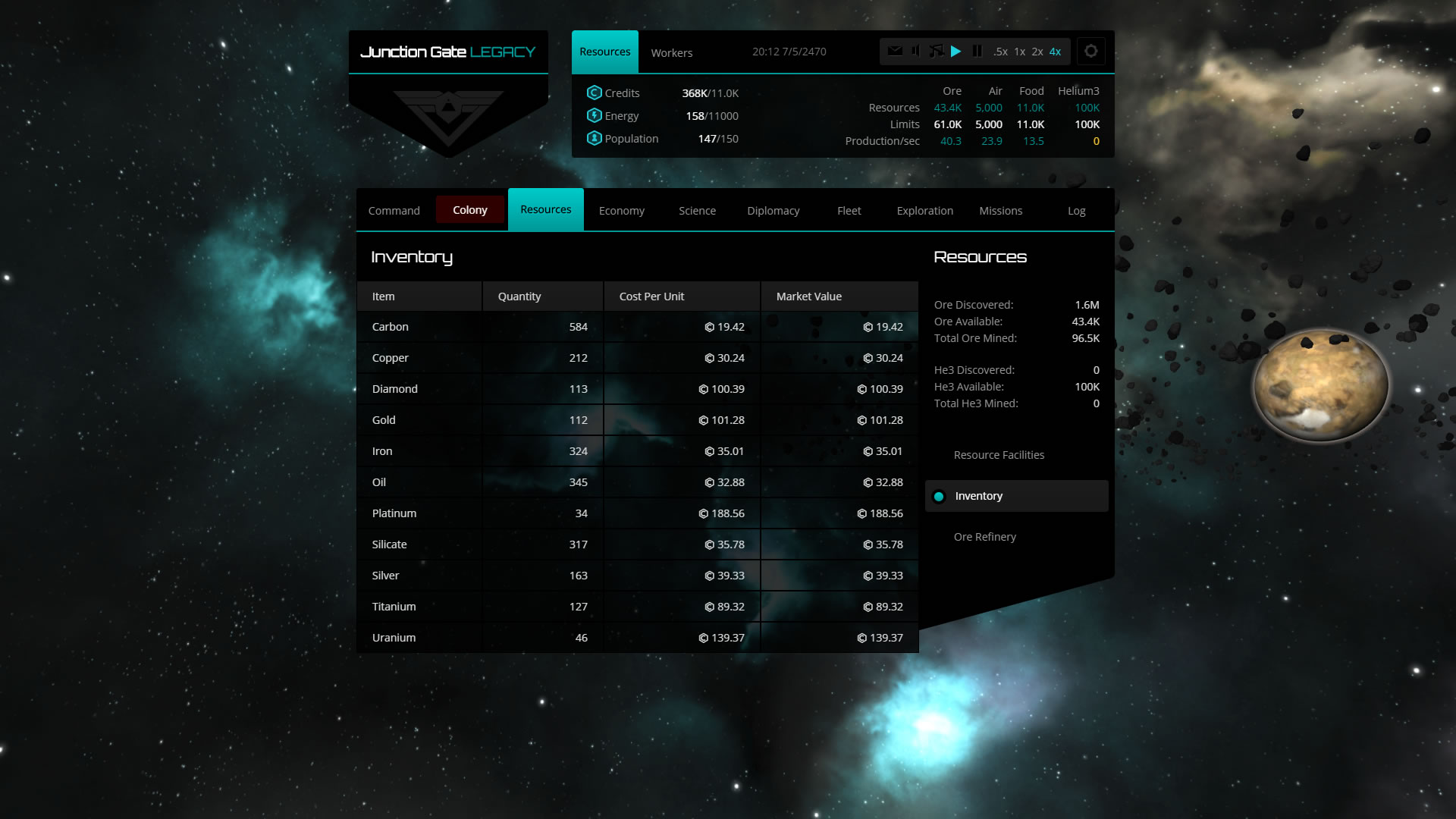 Each colony, company, and ship will have an inventory and the picture above is the first iteration of the colonial inventory. The inventories will be able to house refined resources, products, and also bespoke mission items.

It's been a while since there's been an update on Junction Gate Parallax and I need to announce that plans regarding Parallax have changed due to technical reasons. I had been planning on making it with HTML/JavaScript like Legacy, but unfortunately, the tech isn't there to do that; the ecosystem isn't mature enough to do a lot of 3D features I have planned for it. That's part of the reason why there was such a big delay before because I hit a bunch of technical dead-ends in development. That's also how the 3D game came into being.

Due to limitations of the web tech, Parallax will instead be made with Unreal. It was something I thought about quite a bit before finally making the decision. I'm already pushing what the web can do with Legacy and I'd like Parallax to be even better, but it's just not something that can be done in the browser right now. The upside is that I'll be able to deliver a much better game, but the downside is that there won't be a web version and so it will be premium only.

I have a pretty good idea now of what I want it to be gameplay-wise, but will hold off announcing anything further for that part for now. Regardless, work on Parallax won't start up again until Legacy is done and the 3D version is further along. It's a ways off no matter what, but I wanted to give a heads up in advance. Also, I'm more than willing to answer any questions anyone might have about the change on Discord or reddit, so please reach out if you want to know more.

Caleb and I are working on some features for a larger vertical slice showcase in the future, but I wanted to share a quick preview video of the first iteration of mining in the 3D game. This is just a test level, so the materials and gameplay are all works in progress. 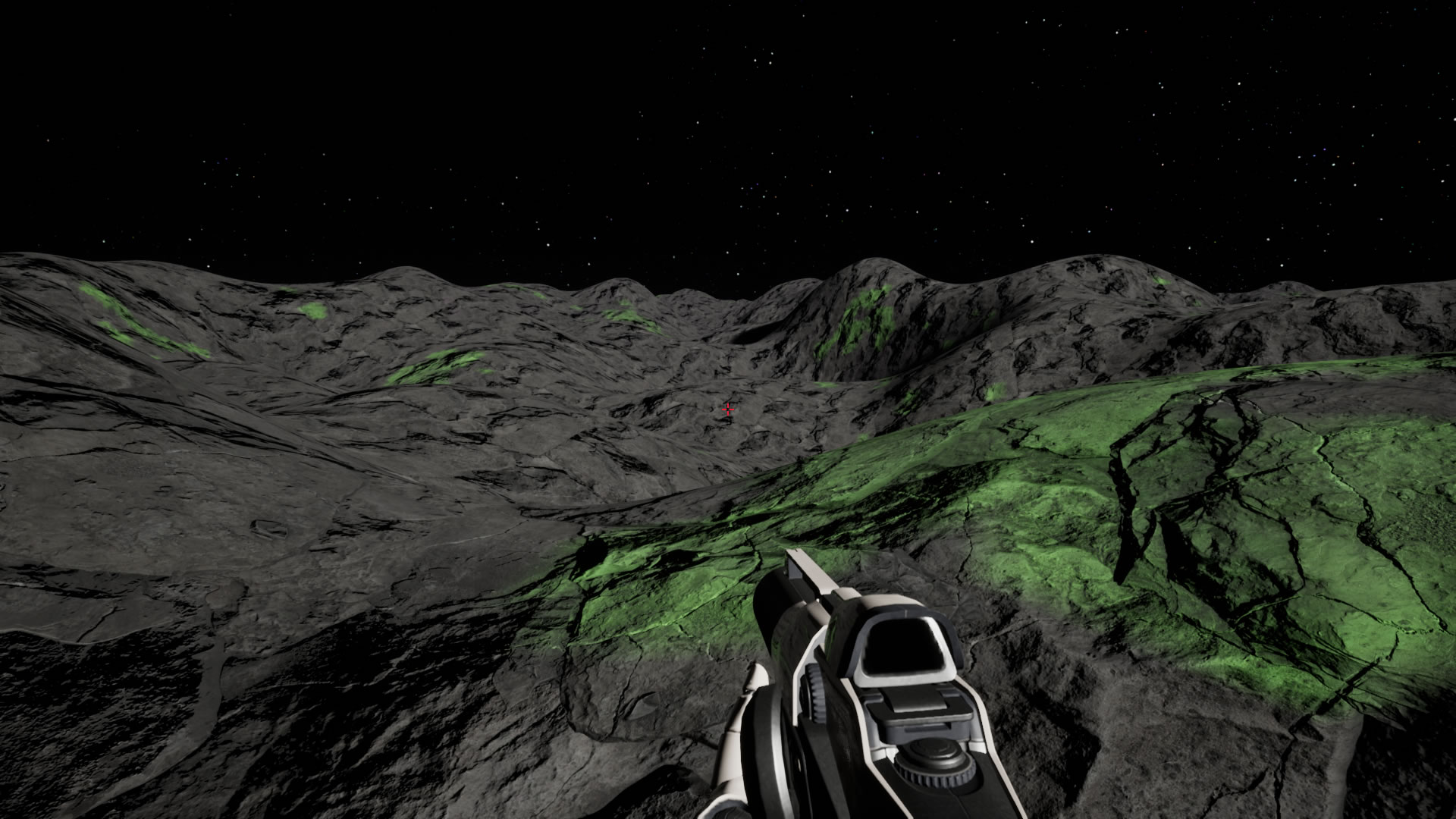 I've been experimenting with ore patch placement. Some metals will be found in patches on the surface or under ground and will need to be mined. 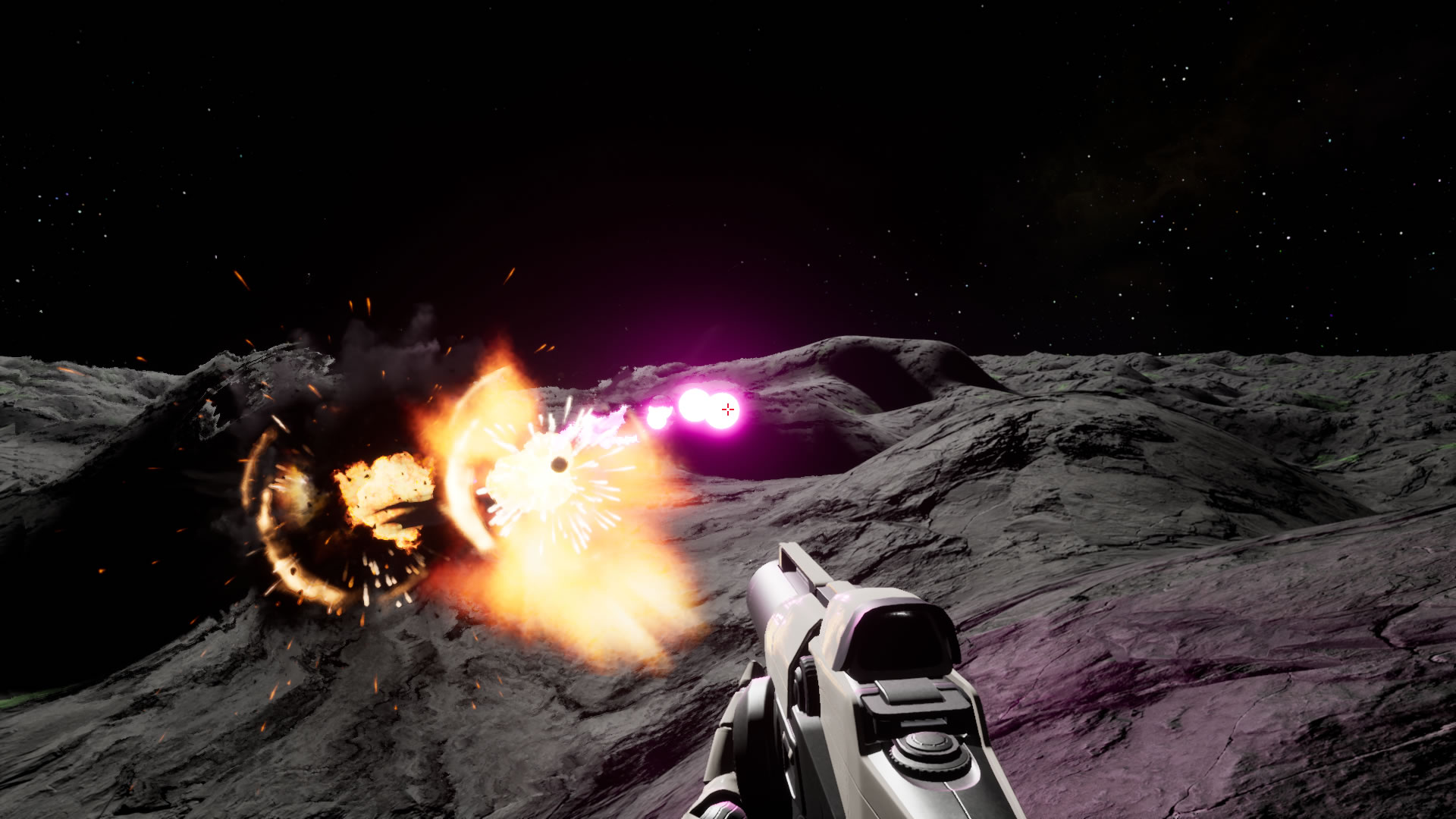 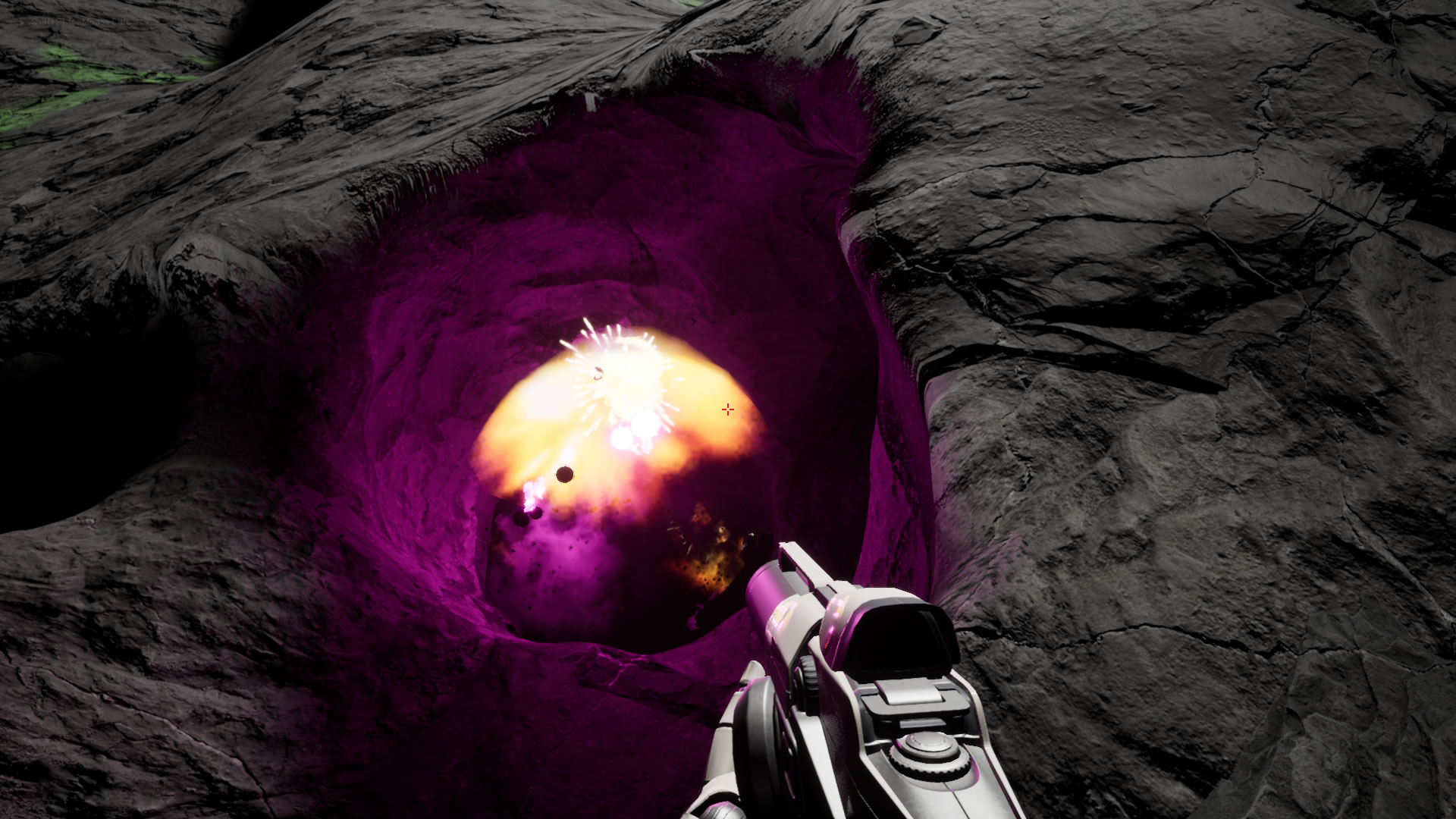 Once the ore has been found, it'll be mined via a mining laser or explosive charges. The grenade launcher here is placeholder and is mainly meant to showcase and test the voxel terrain deformation. But it's also fun.

This next month will be spent bouncing around on various parts needed the economic system in Junction Gate Legacy. For Junction Gate, more work will be done on mining and toward the first vertical slice showcase.