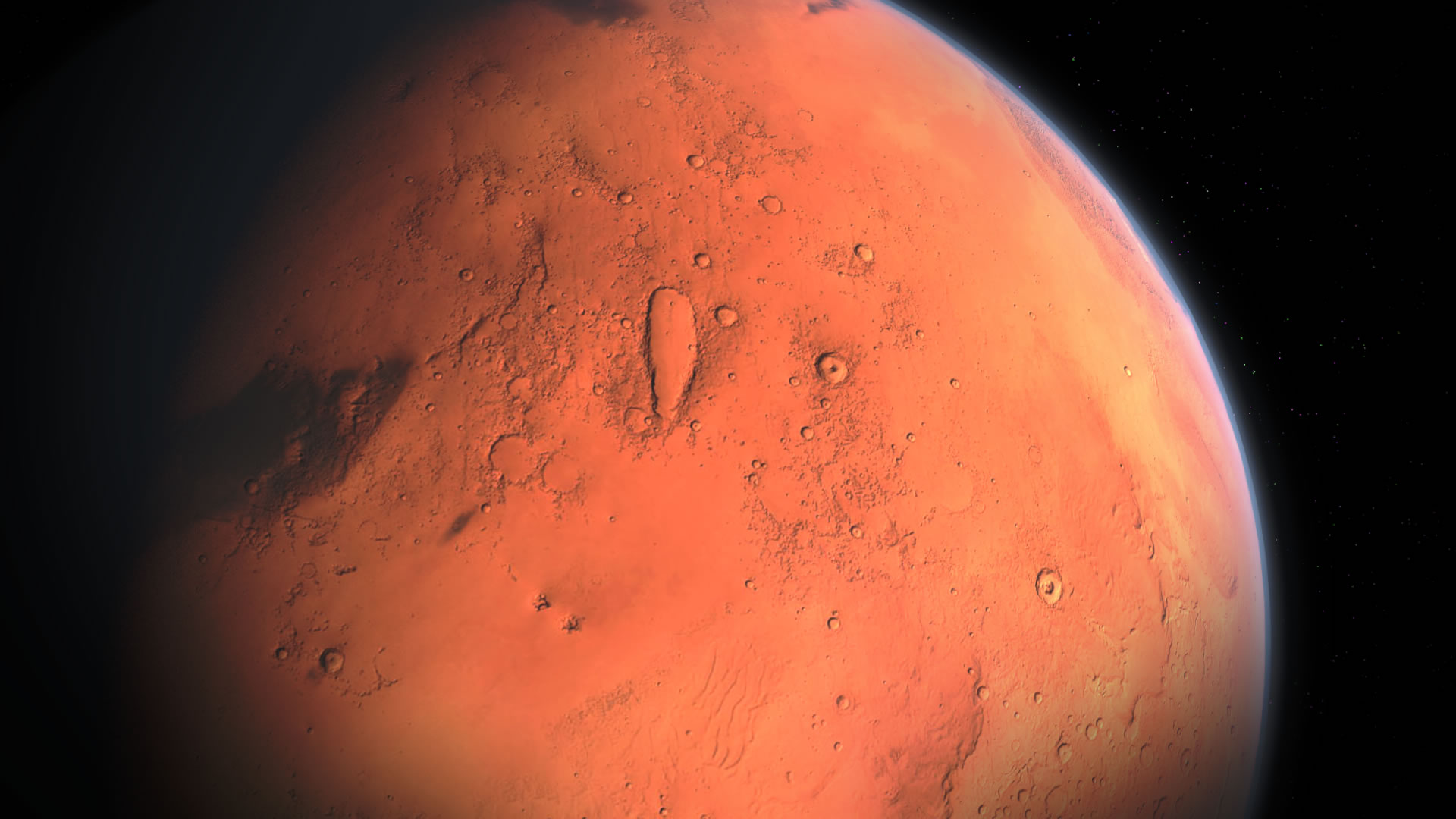 The Fall Of Mars

The first refugees from Earth arrived on Mars on June 17th, 2298, 12 days after the Burning began, when the captain of the luxury cruise ship The Prospero was denied landing privileges in the Milan spaceport because of the riots and decided move on to the next port of call, Vikingstad on Mars.

Over the following weeks, more and more refugees arrived; the Earth's rich and those in power made use of their resources to escape to orbit. While some retreated to Europa or private asteroids and others waited in orbit, most decided that the red planet would be the best location to wait out the storm.

At the time, no one on Mars was aware of the apocalyptic implications of the events on Earth. By mid-October, the Mars Corporate Authority (MCA) had declared a state of emergency, quarantining the refugees in hastily erected camps outside Martian settlements after a limbic riot was triggered in Catenae Utopia.

The nuclear detonations on Earth began on November 3rd, effectively stopping the flow of refugees. When the last detonation was set off on in Sri Lanka on December 22, 2298, only 3.6 million people had been able to evacuate, a tiny fraction of a population of 32 billion.

Mars was overwhelmed. The planet's settlements had only achieved self-sufficiency for its 8 million inhabitants a few decades prior and the sudden population growth of almost 50% broke the back of the red planet's fragile infrastructure.

The refugee camps were scenes of constant chaos. The outbreak of additional limbic riots in the camps mean that the camp residents needed to be further divided, first in groups of 10,000, then 1,000, and then finally 500 as fear of more riots mounted. Each division meant that new habitation domes needed to be constructed, but building supplies and raw materials were dwindling to the point that new camps were little more than airtight bubbles with only marginal heating.

Food and water were scarce. Martian soil was not naturally rich and water was delivered to the settlements via ice convoys from the mining facilities at the poles. To cope with the food crisis, some leading Martian nutritionists developed a liquid nutrient solution that could be manufactured in larger quantities, providing roughly 1200 calories a day per person. The mixture was thick and lumpy and the refugees derisively called the drink Red Sludge.

Only a few dozen men and women from each camp were required for the upkeep and maintenance of the habitations, leaving hundreds without responsibilities to keep them occupied. Fights broke out constantly and the occasional death was overlooked as it meant more resources for everyone else. The bodies were buried in shallow graves in the frozen tundra just outside the camps.

Privacy was almost non-existent. Makeshift tents and structures made from reclaimed parts of spaceships littered each camp, but only the lucky were able to secure a spot in one of those dwellings. The rest slept in the open air under blankets, huddled together for warmth.

The dearth of water also took its toll in the form of poor sanitation facilities. Personal hygiene was limited to once a week and the camps were rank with the odor of unwashed bodies. Sicknesses quickly spread through the camps like waves sloshing back and forth in an enclosed tank.

Mars didn't have a magnetosphere like Earth to protect it from radiation, so radiation shielding was necessary for any settlement. However, because there weren't enough materials available to construct proper habitation domes, many of the camps lacked adequate radiation shielding. The refugees started suffering from radiodermatitis, which caused burns and blistering on the skin. The Martian natives began referring to the camps as leper colonies.

The psychological shock of losing Earth also manifested itself in the tattered psyche of the refugees. Suicides were an almost weekly occurrence. Nearly every refugee suffered from anxiety and depression. It was common to hear people shrieking out in terror during the night as they relived the horrors of the Burning in their nightmares, only to wake up sobbing and drenched in sweat.

The situation was untenable. Even though the MCA was working feverishly to accelerate resource production and to improve the living conditions in the refugee camps, it didn't matter. On February 4, 2302, the first camp revolted and attacked Mars' smallest settlement, Becquerel Crater.

A small group of refugees raided the weapons locker and then tried to seize the settlement's control center, demanding more food and better radiation shielding. The MCA response team stormed the control center after the refugees killed the negotiator, an incident they later claimed was an accident.

The MCA set up a provisional court to rule on the attack. After a long trial of over 8 months, the court ruled that Martian settlements should undergo a further 5% rationing to aid the plight of the refugees. However, the attackers were to be executed.

The ruling was intended to be neutral, but instead sparked a conflagration across the planet. It wasn't enough and yet it was too much.

More camps rebelled and soon began coordinating efforts through acts of terrorism in the settlements. Entertainment galleries, MCA government buildings, production facilities, and even air circulators were all targeted in protest.

The MCA hit back hard, completely destroying three camps overnight by piercing the atmospheric seals and killing over 1400 refugees.

The camps erupted in protest. Martian natives sympathetic to the refugees attempted to overthrow the MCA from within, only to be thrown in prison or executed. The MCA declared planet-wide martial law, resulting seven of Mars' twenty-three settlements seceding from the government and declaring their independence in support of the refugees.

Skirmishes broke out on the barren surface of Mars as the MCA gathered to retake the rogue settlements by force. Only one of the seven takeover attempts was successful while the rest were repelled. The six remaining settlements retaliated by assassinating the CEO of the MCA, along with half the board.

Neither side was willing, however, to take the ultimate step of a full-on assault on a settlement. The stakes were simply too high. The smaller settlements housed tens of thousands of people while the larger had populations numbers in the hundreds of thousands. Instead, clinical strikes and assassinations were traded by both sides for a period of over 18 months.

The nativist civil war only worsened the desperate situation in the camps, causing them to resent all Martians. Food and water became even more scarce. The unrest in the camps grew worse, sparking more terrorism in the settlements, which in turn caused further retribution in response.

Tensions finally boiled over in late 2304 after months of sporadic combat and terrorism. A secret cult called the Aeternae Mortem had arisen from among the stricken refugees. Aeternae Mortembelieved that mankind was being punished for its sins and was fated for extinction. It was their duty, they believed, to accelerate that end.

On December 25, 2304, select teams of the cult simultaneously destroyed food production facilities in twenty-one settlements, effectively wiping out the planet's agricultural capability. They also blew up the ice mining facilities at the poles. Other members began breaching protective atmospheric seals and detonating any explosives they could find, in both the camps and the settlements.

In a single day, over 5 million people were killed. In the weeks that followed, the remaining 6.6 million turned on each other as starvation set in. There was no time to grow new food and, even if there had been, all seed stores had been destroyed.

The refugee camps swarmed into the settlements seeking food, only to cause further limbic riots as the natives were exposed to the contagion. Life support systems were sabotaged in an attempt to preserve food stores a while longer, wiping out hundreds of thousands. Settlements began engaging in open warfare with each other, regardless of previous affiliations.

The 700,000 that managed to escape into orbit fled back to Earth's orbitals and Europa, hoping to find refuge again after Mars.

Those that remained spent their final months in all-out warfare over unsalvageable resources.

The red planet of Ares had fallen and the light of mankind flickered even dimmer.